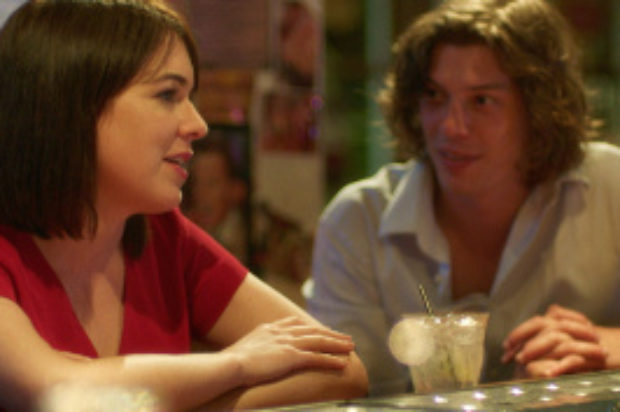 “ELLIPSIS” directed by David Wenham. (Australia)
Cynthia Webb, Gold Coast, QLD, Australia
Australian actor David Wenham has been on many a film set starring in some of this country’s finest films, – also television. He began to ponder the matter of how film-making could be minimalized. now that this time of digital film-making is with us to stay with equipment becoming better every year, it was time to give it a try. I was fortunate to see it on 8th February at a screening at HOTA, ( Home of the Arts, the new name for The Gold Coast Arts Centre) presented by APSA ( Asia Pacific Screen Awards) and Gold Coast Film Festival. (The GC Film Festival is coming up in April, and I hope will screen this film again.)
The result is “Ellipsis”, which was conceived, work-shopped and shot (in 18 different locations around Sydney) in only ten days. AND, there was no screenplay for the two protagonists, known as Viv and Jasper, played by Emily Barclay and Benedict Samuel. Only four crew were involved, the DOP, Simon Morris, and a second cameraman, a sound-man, David’s assistant, and himself.
David Wenham said, “It was a film that I didn’t plan to make. I was well into making another film with this couple of actors, when it fell over, because of a funding issue. It was very disappointing because a lot of work had already gone into it. So, as I’d always wanted to make an experimental film, the actors and I decided to give it a try.”
David talked to them briefly about who their characters were, and took them out to lunch, “in character”. The shared luncheon was filmed, and was a success, with very natural performances from the actors. So the experimental film commenced shooting, on a very simple premise.
Two attractive young people collide on a busy central city pedestrian crossing in Sydney. It was Jasper’s fault because he was looking at his cellphone instead of watching where he was going. Viv, who was also carrying her phone dropped it and smashed the screen. He reverses direction with her, to the side of the street, apologises most profusely and offers to take her to a phone repair shop nearby, run by a quiet and kind Chinese gentleman. Jasper wants to pay for the repairs. At first the repairman says it’s a serious job and will take a while, but when Viv pleads with him, because she’s leaving for London the next morning, he takes it home to work on it overnight.

Hence begins a day and a night of Jasper and Viv, filling in time together, wandering around Sydney, talking, getting to know one another, laughing a lot, obviously becoming more and more in tune with one-another. The only problem is, she is engaged, back in London life. They go by bus out to Bondi, they meet a dog that is out alone but has a phone number on its collar, and call the owner. They take the dog to the owner by taxi, receive complimentary eats and drinks in this grateful man’s café, then go back out onto the streets of King’s Cross, as darkness falls. There they meet various local characters, (these are all real local people) and have further adventures. All of this was as much a surprise to the actors on location, as it was to us, the audience! The young couple are becoming ever easier in one another’s company, getting somewhat tipsy and laughing more and more. The audience is beginning to wish for some sort of ‘happy ending’.
The delight of their night together is that they are living in the moment, free of any other responsibilities, obligations, and seemingly have ‘all the time in the world’ – OR at least until 8.00a.m. next morning when they will collect the repaired phone.

While all this is going on, we have the contrasting images coming from the Chinese phone repairman’s home, where he DOES have obligations, – an annoyed wife, a mother whom he has promised that he’ll assist her with something, plus the tricky job of getting that phone operational again, without the necessary spare part in his possession. Ingenuity is required, and the ending of the film reveals the ingenious way he did it in a quiet way, to the great delight of the audience with whom I saw the film, and linking the opening and closing shot of the film.

This film was delightful, with the charming protagonists, the natural performances, and the wonderful characters of King’s Cross who participated. Spontaneity is the key word, when I think of this lovely experiment in film-making.
David Wenham explained later, that he in fact lives close to King’s Cross and knows the area and all the eccentrics of the area very well. He had made certain arrangements with the ones who appeared, however, it was all a surprise to the young actors. Eighteen locations were visited, in one day and the longest time spent in any one location was two hours. The nightclub scene was where they stayed the longest, – 20 minutes!

One would think that a film like this, leaving so much to chance and the spontaneity of the actors, could end up being a bit of a mess! However, in this case. The cinematography is extremely good, and the editing has brought it all together seamlessly . The fact that Simon Morris (DOP) has experience in documentary filming as well as narrative features was a big advantage. No artificial lights were used – there was no time or money, for that.
Following two days of ‘work-shopping’ the film, they took to the streets, and all the shots in the film were captured in one take only, with no rehearsals
When asked about the stress levels , during the shooting process, David Wenham answered, “It was the least stress I have ever experienced on any film set. We were all feeling liberated, instead of having to always follow detailed instructions.”

Well known and respected film director, Robert Connolly, (“Balibo”) was Executive Producer on this project, and he said he’d be very happy to collaborate any time on another film with David Wenham. He enjoyed it because of the freedom from the normal list of ‘barriers’ that are involved with a normal type of film shoot, that involves a lot of people and equipment. Permissions are required for so many things. Rules apply in many places, such as not being able to shoot at Bondi, or on trains, he explained. When asked about the budget for this cinematic-experiment, Robert Connolly laughed and said, “Put it this way – I’ve made short films that had a bigger budget than this one. We call it a micro-budget. It’s the extreme end of experimentation.
Immediately after the shooting was complete, David had obligations to be in the USA for a role, so editing didn’t commence until about seven months later. This turned out to be a big advantage. He found he had a useful distance from the footage, and could make decisions easily. He was not so attached to the material.

David explained more about the pleasure of this way of filming. “I loved doing it and it exercised more creative muscles than being an actor. It’s the little moments of human connection, that count. Get rid of those devices (cellphones) and you have the opportunity to really connect. “
When asked what he wanted the audience to take away from seeing “Ellipsis” he said.
“I don’t want to be prescriptive. They can take away whatever they want.”
For this writer personally, I realized afterwards, that almost the only time I find I can live in that un-tethered, free and unobligated way, following the flow of events and going with it, is when travelling, (preferably overseas.) One’s normal life isn’t pulling on one in the new place, and there’s no particular routine to keep to. If something happens, you can just enjoy it, participate, follow its lead.
It also points out in a subtle way, how much we are missing by being preoccupied with ‘devices’ as David said, and missing certain experience which present themselves, hurrying on by, following an often self-imposed routine. For a day and a night, Jasper and Viv just set themselves free.

If you have an opportunity to see this film, please go along – you’ll enjoy it, and also it’s very good to support this experiment in film-making that turned out so well. You will then resolve to be ever watchful for these fleeting moments when life offers you an opportunity to connect with a stranger, and to be careful never to let them pass you by.