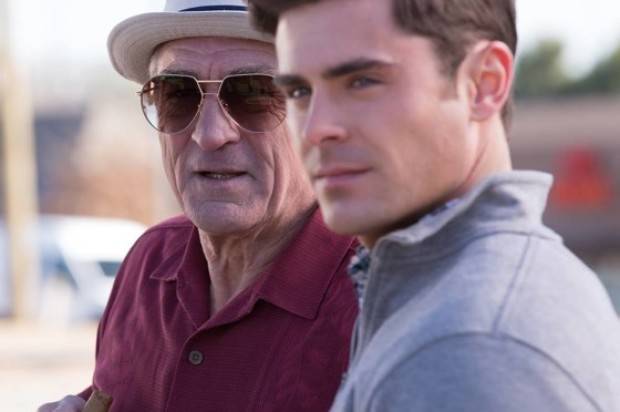 The un-PC comedy that revels in making its audience as uncomfortable as they can is a subsect of the comedy genre I happen to quite like. But in order for it to be effective it has to be, well, funny! And, tragically, ‘Dirty Grandpa’ is so deliriously un-funny, not to mention offensive, that it winds up a sheer embarrassment for all involved. It’s fitting that the film begins at a funeral as this “comedy” is similarly dead on arrival as director Dan Mazur (who helmed the much more pleasant ‘I Give It A Year’) and writer John Philips waste zero time in highlighting the gimmick this film essentially stretches to 100 groan-inducing minutes – how many times can we get Robert DeNiro to say f*ck!?

That’s literally all this film banks its success on, that and Zac Efron’s constantly near-naked frame, and though there are a few mild chuckles to be had at DeNiro’s crass dialogue, you can’t help but sit in a state of shock and sadness at what the once-great actor has been reduced to. For those interested in what kind of plot this pathetic production passes off as a narrative, ‘Dirty Grandpa’ focuses on the titular uncouth geriatric Richard “Dick” Kelly (DeNiro) and his uptight grandson Jason (Efron) as they embark on a road trip to…I honestly don’t even remember the destination or reasoning behind it because it ultimately doesn’t matter. Along the way Dick swears, Dick offends, Dick behaves…well like his namesake, and it results in the duo arriving in Florida during Spring Break.

For Dick this excursion puts him on the path towards meaningless, animalistic sex with eager student Lenore (Aubrey Plaza). For Jason it allows him a chance to reunite with college partner Shadia (Zoey Deutch) in between the various jail-visiting, drug-taking, constantly-naked shenanigans his loving grandfather seems to provoke. As we cringe at DeNiro trying to recapture his youth as he uncomfortably gyrates with a twerking Plaza, and pity poor Efron as he appears in a scene in nothing but a bee plush toy covering his genitals that results in mistaken paedophilia (a young child attempts to stroke the bee – oh the hilarity!) you wonder how much more do you have to suffer before the film comes to its senses.

I know it sounds as if I’m being particularly harsh on ‘Dirty Grandpa’ but I entered the film with the most positive of mindsets as the trailer admittedly made me giggle (and I’ll tell you now, the trailer is literally a composite of all the “best” bits) and I like all the cast involved, but this tested my patience on how much debauchery I could handle. DeNiro’s been on a slippery-slope in his career for a while now but this doesn’t just sit at the bottom of the barrel, this punctures the landing underneath. Efron is an enjoyable presence on-screen no doubt but his shtick of constantly getting his gear-off is becoming laughable at this point (we get it Zac, you’re pretty and gym-fit) and even he appears fed-up with it. Deutch is easy on the eyes, and pretty much escapes the film unscathed, Julianne Hough (as Jason’s stereotypical bridezilla-to-be) does little more than snap and sulk, and Dermot Mulroney (as Efron’s father) barely registers, but of all the supporting players it’s Plaza that stands-out as both the film’s most unpredictable asset and biggest disappointment; the usually sour comedienne looks to be enjoying herself as the loosest of girls imaginable but just as she lights the screen up with a few choice lines, Mazur’s inability to know when to end a scene means she comes off looking sad and embarrassed.

‘Dirty Grandpa’ is indeed dirty. It’s crude and crass, and had it had genuine talent behind the lens to match its clearly talented cast it might’ve been an enjoyably filthy ride that could’ve produced actual laughs. Sadly, this isn’t the case and what we’re left with is a poor excuse of a film that wastes its actors and its audience’s precious time.