The principal cast features Jemma Rix in the role of Elsa, Courtney Monsma as Anna, Matt Lee as Olaf, Thomas McGuane as Hans, Sean Sinclair as Kristoff, Aljin Abella as Weselton and sharing the role of Sven, Jonathan MacMillan and Lochie McIntrye.

Frozen is considered one of the most technically advanced productions ever mounted in Australia with a total cast of 38, an incredible 440 costumes, and 65 tonnes of scenery and automation in an unforgettable theatrical event that Newsday called a ‘serious mega hit!’ 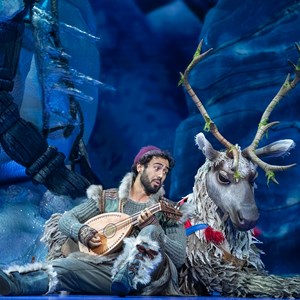 The costumes, all handmade in Australia, saw a 70-person team engaged to bring the opulent setting of Arendelle to life; trims and all. Elsa’s ice dress alone takes one person 60 days to sew on 14,000 beads and crystals, and three months to make the dress from start to finish. The custom embroidery on Anna’s gown in the coronation scene takes over 100 hours to create and is done entirely by hand.

Costume fabrics and trims have been sourced from fourteen different countries around the world. There is no real fur in the show – the fur on Kristoff’s costume is custom knitted for the production and 80-year-old Brisbane based Margaret Remington was engaged to hand make much of the knitwear for the iconic scene at Oaken’s Trading Post and Sauna.

Forty-five tonnes of flying scenery and twenty tonnes of automation and staging have been built to recreate the fantasy city of Arendelle including inside the castle, spectacular ice palace, magical forest and icy mountain top. The set conjures snow and ice with everything from sculptural set pieces to video and lighting effects. In the opening act even the warm carved woodwork of the proscenium seems to freeze solid in front of our eyes as Elsa lets loose her powers– the crystallization spreading outwards from her touch, timed with music and lights projected onto the surface. The production uses 350 litres of liquid CO2, refilled once a week, to pump out the fog during each show. There are 75 million individual video pixels used throughout the set to ‘freeze’ over the whole set from floor to ceiling – the tiles are the second smallest used in the world and are the size of your pupil.

QPAC Chief Executive John Kotzas warmly welcomed Disney Theatrical Productions back to Brisbane and said audiences would be absolutely wowed by the much-anticipated season of Frozen and they were!

“Anyone who has experienced the magic of Mary Poppins, The Lion King and most recently Aladdin, would know Disney’s stage productions are in a class of their own, and Frozen is no exception,” he said.

“There’s such a Frozen buzz, inside the theatre and around Brisbane, as we prepare to open this blockbuster musical this week and as expected, tickets to this limited season are in hot demand already. With breathtaking sets and costumes, a score featuring both much-loved Frozen classics and new songs and an acclaimed cast, this record-breaking musical is set to captivate people of all ages. Like all Disney Theatrical productions, Frozen is not just for kids and not just for fans of the Frozen movie, this musical is an experience in itself and one certainly not to be missed,” Mr Kotzas said.

Frozen, adapted from the Disney film and original 1844 fairy tale by Danish author Hans Christian Andersen The Snow Queen, is brought to fresh theatrical life in this luxurious new musical.

Frozen’s journey sweeps audiences up into its thrilling world of adventure and classic comedy. While it does feature true love, the story has become beloved around the world for breaking the princess mold of girls needing to be saved by a prince, instead, focusing on the bond of two sisters, Elsa and Anna.

The stage production features a full score, including 12 new songs from the original Academy Award-winning songwriters written especially for the stage.

Frozen opened on Broadway at the St. James Theatre in March 2018 with the highest box office advance in Broadway history. Frozen was also the highest grossing new musical of its Broadway season in its first year on Broadway. Its global footprint has expanded to include a North American tour, with productions now open on the West End as well as in Germany and Japan. The Australian production was the first Disney Theatrical Productions show to open worldwide since the COVID-19 pandemic shut down theatres across the globe in March 2020.

The animated film Frozen was released by Disney on November 19, 2013 and was a critical and box office smash, earning over USD$1.28 billion in worldwide box office revenue and becoming the highest-grossing animated film at the time as well as the highest grossing musical film, before being surpassed by the remake of The Lion King in 2019. Frozen II had the highest all-time worldwide opening for an animated film and went on to gross USD$1.45 billion worldwide.

Frozen will play in QPAC’s Lyric Theatre for a limited 12-week season. Tickets at qpac.com.au or phone 136-246.