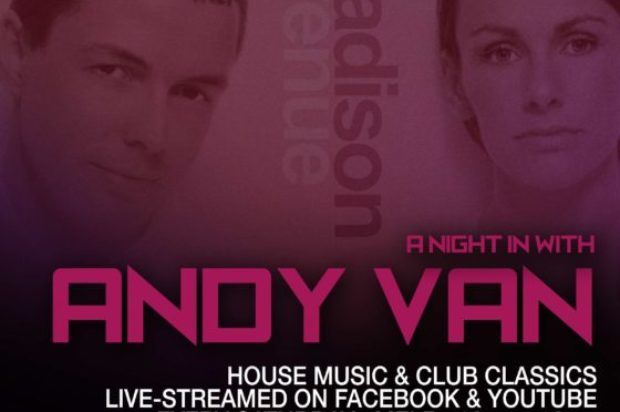 A NIGHT IN WITH ANDY VAN
This Saturday 13th June at 10pm AEST, Andy Van returns to present his: ‘A NIGHT IN WITH ANDY VAN’ Live Stream. Playing House Music & Club Classics, this week Andy Van presents a Madison Avenue special. With a selection of the best Madison Ave remixes & info on where some of the samples originated from. Don’t miss this show in the comfort of your home!

In 2019, they celebrated the 20th anniversary of Madison Avenue’s international number one track: ‘Don’t Call Me Baby’ (#1 TraxSource Global Chart, #1 iTunes in Portugal, #1 ARIA Club Chart & Top 5 in many other Global Charts) which is a true testament to the successful longevity in the Australian dance and pop music scene. The duo now work separately in the music industry, Andy Van continues to work as a successful DJ / Producer & Record Label Owner at Vicious Recordings and Cheyne Coates is a songwriter writing tracks for other Artists.