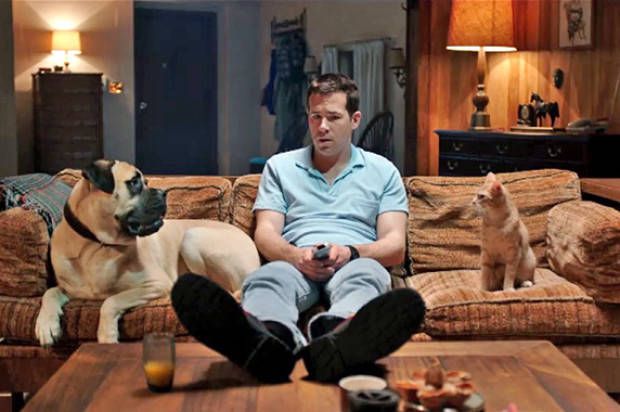 Black comedy is a tricky thing to execute correctly, and sadly ‘The Voices’, despite an intriguing premise and a considerably talented ensemble, fails to balance its ingredients successfully. It’s a bit too brutal to be truly funny yet similarly it’s a little too off-kilter to be deemed a straight-up horror film – but who’s to blame? Director Marjane Satrapi certainly delivers on a visual level, and lead Ryan Reynolds foregoes any of his usual cocky traits by turning in a subtle performance layered with eccentric nuances that help make his rather troubled character strangely likeable.

The story itself focuses on Jerry (Reynolds), a seemingly chipper employee at a bathtub factory who exudes an almost child-like innocence. In his apartment-for-one he keeps himself company with his pets, his dog Bosco and his cat Mr. Whiskers. It doesn’t take long to realise that the titular voices are that of Bosco and Mr. Whiskers who are manifestations of Jerry’s delusional imagination. Adopting a style similar to that of Anthony Perkins in ‘Psycho’, Reynolds projects a simplicity in his performing personality, made all the more effective (and terrifying) when he acts on his violent tendencies – a trait of his personality that result in some particularly gruesome moments.

The film itself is very much catered to the talent of Reynolds, his vocals for the respective animals are impressive, but he’s managed to surround himself with a bevy of reliable performers who all consequently deliver. Gemma Arterton does her usual sex-pot routine as the object of Jerry’s affection, and though it’s a particularly two-dimensional part, the British starlet hams it up accordingly. Anna Kendrick fares a little better in an expectedly likeable part as one of Jerry’s co-workers who may be the only one able to humanise him, whilst Jacki Weaver makes for a brief but sympathetic counsellor hoping to ween Jerry away from his hallucinatory state.

The aforementioned visual style of director Satrapi is where the film feels the most comfortable though, with Jerry’s medicated world a dark and grungy existence that highlights his violent behaviour. This is wonderfully offset by his non-medicated existence where he plays in serious splashes of colour – pink being the most dominant – and his unfortunate victims are able to communicate with him, even if they’re just a severed head. On that note the various violent sequences in the film aren’t played with any bouts of humour, and though an R18+ rating may seem a little extreme, it’s certainly an unpleasant film when it wants to be.

With so much talent on board and an undeniable visual style, not to mention a promising premise, it’s tough to completely write-off ‘The Voices’ but this visceral experience is so off balance that it’s difficult to truly enjoy it for the film it wants to be. Understandably a title that bypassed the cinemas, this film could very well find its own voice on the DVD shelf where its name-brand cast could potentially pull in a few unsuspecting viewers – just don’t say you weren’t warned about its tough-sell mentality.