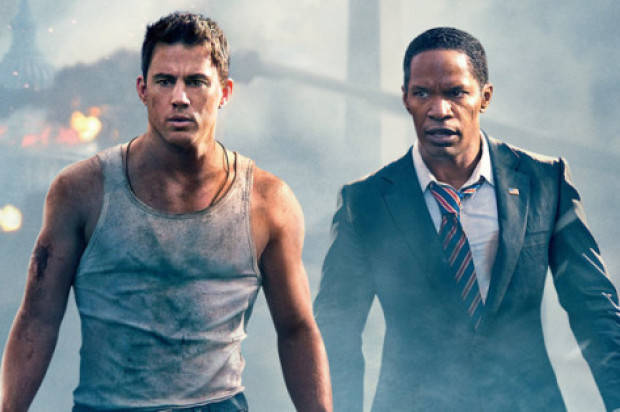 DVD RELEASE: WHITE HOUSE DOWN
Release date: 2nd January 2014
Director: Roland Emmerich
Cast: Channing Tatum, Jamie Foxx, Maggie Gyllenhaal, Jason Clarke, James Woods
Classification: M (Action Violence and Coarse Language)
Review by Peter Gray
Leading up to its initial cinema release ‘White House Down’ seemed like a guaranteed Box Office success. With director Roland Emmerich (‘Independence Day’, ‘The Day After Tomorrow’) at the helm and Hollywood golden boy Channing Tatum (coming off a lucrative 2012 where he drove ‘The Vow’, ’21 Jump Street’ and ‘Magic Mike’ each over $100 million globally) front and centre, this ‘Die-Hard-in-the-White-House’ had enough going for it to be considered a sure-fire success. Then came along ‘Olympus Has Fallen’ and suddenly things weren’t looking so peachy. Whilst the script for ‘White House Down’ was already making the rounds before the aforementioned actioner was ever in production, Gerard Butler’s violent outing won the race and essentially shot down the chances of a second visit to the Oval Office.
Where ‘Olympus Has Fallen’ adopted a particularly hardcore approach to the set-up of the White House being taken over by terrorists (in their case North Koreans), ‘White House Down’ wants the broadest possible audience, and so the cheese factor is amped up just enough so that you can enjoy the film knowing the filmmakers intended for it to be just as ridiculous as it comes across. Like ‘Olympus…’ the villains here are a walking stereotype, but unlike that film it isn’t as blatantly racist, or as violent, with a series of ultra-right winged, white-power extremists, mercenaries and disillusioned soldiers rolling in to the White House for some good old fashioned payback. Lucky for the president (Jamie Foxx) then that U.S. Capitol Police officer John Cale (Tatum) is in the building, only by chance though having just flunked his interview to join the secret service. What are the chances?
Looking at the story it seems quite obvious at how much of an influence ‘Die Hard’ was, whether it be intentional or not, as Tatum’s everyman hero Cale appears heavily patterned on Bruce Willis’ John McClane. In addition to spending a great deal of the film in a dirty undershirt (the female fanbase no doubt appreciative), his main priority is to save his daughter (Joey King), mirroring McClane’s mission to rescue his wife, and he resists the call of action as long as he can before being forced to save the president’s life. Tatum has certainly come into his own over the last two years, and there’s no denying he has the suitable requirements to be an action hero. As for Foxx as the commander-in-chief, he’s more or less a lighter version of Barack Obama, not taking proceedings too seriously along the way. The camaraderie between him and Tatum is where a lot of the films best moments arise, and you can’t help but hope these two team up in the future for another project that benefits their comedy-come-action stylings.
No matter the pedigree of the cast though, Maggie Gyllenhaal, James Woods and Richard Jenkins are also involved, ‘White House Down’ is absolutely absurd but that’s a part of its charm. It may make ‘Olympus Has Fallen’ look modest by comparison, but that film seemed to take itself too seriously, and as Emmerich has no doubt realised how ridiculous a film he’s made, he has so much fun with it in the process; a car chase across the White House lawn with the president shooting a rocket launcher at his attackers is a prime example of the amusing sequences involved. Whilst the film won’t be for everyone, if you are smart enough to check your brain at the door, you’ll be able to revel in the stupidity of this insanely fun film.
My rating: 3/5 (Down for a fun viewing)