A Billion Lives documentary film Premiere by Caroline Russo | on July 8, 2016 | 0 comments | in Film | Like it “A BILLION LIVES” THE E-CIGARETTE CONSPIRACY DOCUMENTARY RATED 9.9/10 ON IMDB, ORIGINALLY BANNED FROM BEING ADVERTISED ON FACEBOOK

Imagine a quit-smoking tool with an unprecedented success rate that is described by public-health authorities and experts as “at least 95 percent safer than smoking”.

Would you use it? Would you allow it? Or would you ban it? Some governments are going with option C – and a new conspiracy documentary being premiered in Melbourne on Sunday will explore why.

Some governments, including the EU and UK, have approved e-cigarettes, with more than six million people having used them across the EU to stop smoking so far.

Yet other governments, including in Australia, are imposing bans on ‘vaping’ (as the use of e-cigarettes is known) as a method of improving health outcomes.

The makers of A Billion Lives smelled a conspiracy – and specifically a conspiracy documentary – and as it turns out, their theory makes compelling viewing rated 9.9/10 on IMDB.

“According to the World Health Organisation, we know a billion people are set to die this century from smoking and smoking-related illness,” said the film’s Director Aaron Biebert.

“And the Royal College of Physicians in the UK has said e-cigarettes are much safer than smoking and smokers should be encouraged to use them.

“So we have a cheap, effective mechanism to help people stop smoking – e-cigarettes – and yet that mechanism is being withheld in places including Australia.

“In A Billion Lives we explore the possible reasons why, including the role of big tobacco, the big pharmaceutical companies who make millions of dollars out of smoking cessation products, and the WHO which, despite the weight of evidence, leads a campaign against e-cigarettes.

“I’m on a mission to save a billion lives from my crooked American leaders.

“Unfortunately, the Australian government followed what they said, even though the US court threw out the ban years ago and there are now millions of new former smokers.

“Quitting smoking is hard, and it fails the common sense test that you would ban something now proven to be a major help in stopping.

“If it doesn’t make sense, then there must be another explanation. As the film shows, you are being lied to.”

Biebert says the best, most compelling conspiracies are the ones where you are asking reasonable questions and getting unreasonable answers, and this a documentary about a situation that fits that bill.

“The machinery behind the sugar, animal processing and fast food industries has been questioned by film makers in the past, but we think conspiracies about French fries are small fry,” said Biebert.

A Billion Lives World Premiere was at the DocEdge Festival (NZ) on May 11, 2016, and the film has since shown in Europe. Based on that, it already has a 9.9/10 IMDB rating, which is higher than Shawshank Redemption. 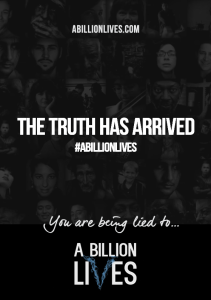 The Australian premiere will show as part of The Melbourne Documentary Film Festival on Sunday 10 July 2016 at Howler in Brunswick. Tickets at www.moshtix.com.au. Trailer at http://abillionlives.com