ELVIS TO PREMIERE ON Gold Coast

#ElvisMovie Baz Luhrmann gold coast Universal Pictures Warner Bros. Pictures by Caroline Russo | on May 4, 2022 | 0 comments | in Entertainment | Like it

The Australian director, writer and producer will be joined by stars
Austin Butler and Olivia DeJonge at Event Cinemas Pacific Fair

ELVIS is released in Australian cinemas on June 23

Universal Pictures, on behalf of Warner Bros. Pictures, will be thrilled to announce the greatest show on Earth will come to the Gold Coast when Oscar-nominated visionary filmmaker Baz Luhrmann returns home for the Australian premiere of his highly anticipated drama ELVIS.

Fresh from its world premiere at the 75th Festival de Cannes, Luhrmann will be joined by two of the film’s leading stars, Austin Butler and Australian Olivia DeJonge, on the red carpet at Event Cinemas, Pacific Fair on Saturday, June 4.

Many of the film’s 95 Australian cast members are also expected to attend the gala event before a glamorous private after-party with surprise musical guests.

“There’s simply no way we could premiere this film anywhere else in Australia but the Gold Coast; or as we have come to know it, ‘The Goldie.’ Not only did we shoot the film there, but with the support of local council and government, we were able to complete almost all the post-production there as well,” Luhrmann said.

“My entire creative team, our families and I have developed a true love of and deep relationship with the emerging energy and creative spirit of The Goldie. The many artists and friends whom we have met along the way have made us think of it as a new creative home. I’ve been quoted saying, and will continue to say, that I would recommend to any filmmaker in the world to come to this exciting place. The Gold Coast is bursting with the energy, creativity, good food and great people essential to making a movie.”

ELVIS is an epic, big-screen spectacle from Warner Bros. Pictures and visionary, Oscar- nominated filmmaker Baz Luhrmann that explores the life and music of Elvis Presley, starring Austin Butler and Oscar winner Tom Hanks.
A thoroughly cinematic drama, Elvis’s (Butler) story is seen through the prism of his complicated relationship with his enigmatic manager, Colonel Tom Parker (Hanks). As told by Parker, the film delves into the complex dynamic between the two spanning over 20 years, from Presley’s rise to fame to his unprecedented stardom, against the backdrop of the evolving cultural landscape and loss of innocence in America. Central to that journey is one of the significant and influential people in Elvis’s life, Priscilla Presley (Olivia DeJonge). 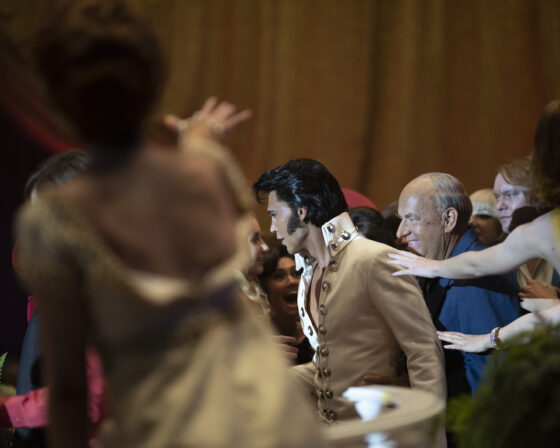