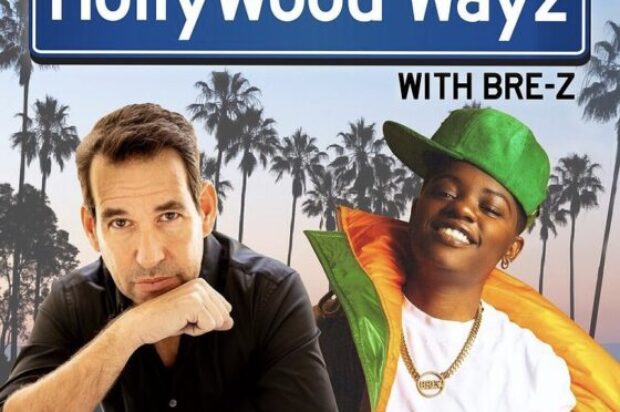 Following on from the global success of ‘Victory the Podcast’ (which reached #1 Apple Podcasts in the U.S, Canada, Australia and Top 2 in Ireland, Israel, South Africa, New Zealand, Sweden + more in the TV & Film category, as well as Top 150 in overall categories in many countries and 5 Million+ downloads) and Selling Out their recent LIVE stage show (Sunday 29th August) at ‘Brea Improv’ (this live Podcast recording will be added this Saturday Aus time to all platforms), ‘Hollywood Wayz’ will focus on Doug & BRE-Z’s love for TV, Film, Food, Sports and more, as well as drawing from Doug’s 30+ year career in Hollywood.

Doug Ellin and Rapper / Actor BRE-Z (All American, Empire) will take you on a guided tour of Los Angeles. They’ll be exploring where to eat, where to meet, how to see and be seen and how to make it, in the pursuit of the ultimate Hollywood dream of fame and fortune. From the perspectives of a middle-class outsider from Long Island, NY, to one of the most sought-after producers in town and Philadelphia / Atlanta – working her way up in the music and television businesses. Ellin and BRE-Z are going to chat with writers, actors, producers, cinematographers, musicians, restaurateurs and everyone in between – to give listeners a full picture of how the town and the business of Hollywood are really run.

“I wanted to find someone to partner with who had a completely different path and perspective to me. Someone with a unique story and voice, and I feel very fortunate to have found that in the super talented BRE-Z,” said Ellin.

The success behind these podcasts, is (and will be) the funny and insightful ‘behind-the-scenes’ stories, the friendships and fun banter, as well as the way guests are interviewed and how everyone interacts in a relaxed, fun and upbeat ‘Catching up with friends’ type style. Also, making the listener feel like they are in the room.