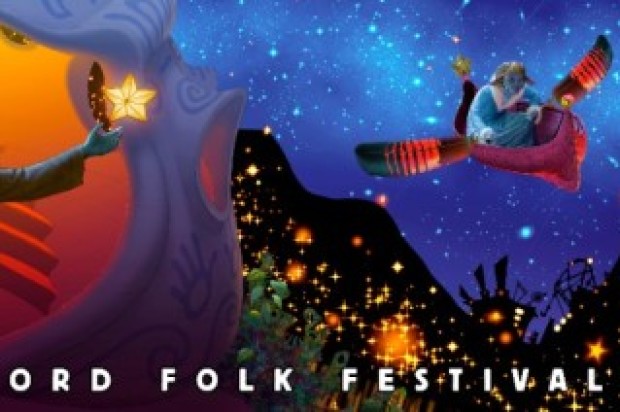 Soaring above 7 metres high, Poidomani’s creations, The Elders, crept, walked, waved and demonstrated their life-like attributes as students from the Queensland University of Technology undertaking training with Poidomani practiced their puppetry performance skills.

Programme Manager, Kylie Southwell, said, “We are so privileged to host such a masterful giant puppet-maker who’s creations bring enormous joy and lend a magical air to the festival streets on a grand scale.”

A total of 14 puppets will be created by Poidomani to perform at the Opening Ceremony, the flagship closing Fire Event, and each evening throughout the festival. The puppets have been produced as part of a partnership between Woodford and QUT Creative Industries students, which is now in its fourth year.

Among those under construction were the hero characters of this year’s programme, Astrid and Naut, who will encourage Woodford’s patrons to take a creative journey throughout the course of the festival.

Festival Director Bill Hauritiz said: “The Woodford Folk Festival has always been far more than a music festival – it is a celebration of culture and the arts. This is exemplified by the diversity of the programme, which includes talks, arts and crafts, workshops and so much more. Poidomani’s incredible puppets take this creative atmosphere to a whole new level, bringing Woodford’s theme to life and giving every patron a sense of magic.”

The Woodford Folk Festival site is currently under construction; once fully completed, Woodfordia is the 67th largest town in Australia. Festival goers venturing to the 500 acre parkland north of Brisbane will be treated to more than 400 acts, across 25 venues, during the six days of the annual summer event, with the 31st programme being an evolution of the cultural, artistic and social expression it has become internationally renowned for.

Pre-Festival tickets (20% discount) are on sale now at
www.woodfordfolkfestival.com