EXHIBITION ON SCREEN CELEBRATE A DECADE OF ART ON FILM WITH THE RELEASE OF HOPPER: AN AMERICAN LOVE STORY

#cinematic American love story EXIBITION ON SCREEN by Caroline Russo | on September 24, 2022 | 0 comments | in Entertainment | Like it 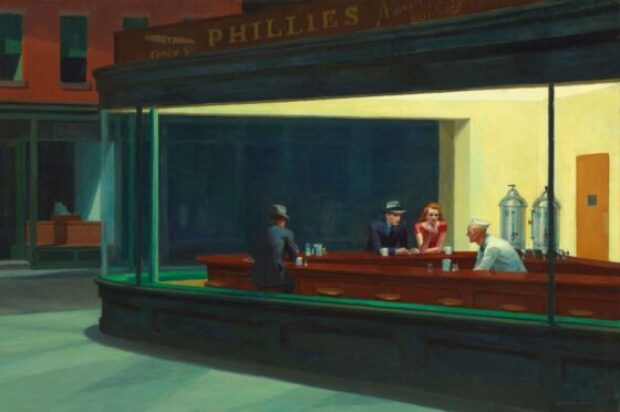 What Makes the Edward Hopper Nighthawks Painting so Recognizable? | Widewalls

IN CINEMAS ACROSS AUSTRALIA FROM 20 OCTOBER 2022

Exhibition on Screen launch their tenth season of art films with the release of Hopper: An American Love Story, in cinemas around Australia and internationally, on Thursday 20 October 2022.

Written and directed by BAFTA award-winning director, Phil Grabsky, this fascinating documentary examines the life and legacy of one of America’s greatest 20th Century artists, Edward Hopper [1882 – 1967] whose iconic streetscapes, and poignant portraits of American life, continue to inspire artists and captivate audiences the world over.

Writing for Time Magazine in 2011, Australian critic, Robert Hughes, described Hopper as “Along with Jackson Pollock… probably the most original American painter of the 20th century.”

Hughes also proposed that “no American painter has influenced popular culture more deeply”, a claim easily evidenced by the countless artists, writers, filmmakers, photographers, cartoonists, and musicians who have drawn inspiration from his artworks.

Defined by “a unique pictorial vocabulary, pioneering use of colour, and mastery of light and shade” [Another Man, 2020], Hopper’s work is some of the most recognisable art in America, referenced and immortalised by such diverse creatives as Alfred Hitchcock, David Lynch, Wim Wenders, David Hockney, Mark Rothko, Norman Mailer, Paul Auster, Tom Waites, The Simpsons, and Banksy.

Yet for all their popularity, Hopper’s paintings remain as enigmatic today as the time they were created, ensuring his place as one of the most intriguing artists of his generation.

Filmed on location in the USA and Paris, Hopper: An American Love Story takes audiences on a profound journey, shining a light on Hopper’s art, vision, eccentric lifestyle, and relationships.

Central to the story is his enduring collaboration with fellow artist, Josephine Nivison Hopper, his wife of 43 years, who unwittingly sacrificed her own career to bring him to prominence.

The film features archival footage of interviews with Hopper, and insightful commentary from diverse international experts, interspersed with readings from Hopper’s and Josephine’s recently discovered diaries and letters.

Hopper: An American Love Story opens in cinemas across Australia and internationally on Thursday October 20, 2022. Find your nearest screening at exhibitiononscreen.com/find-a-screening/.

The international release of the film is timed to coincide with the opening the Whitney Museum of American Art’s major exhibition, Edward Hopper’s New York, October 2022 to March 2023.

This year marks a milestone for Exhibition on Screen, as the award-winning company celebrates a decade of bringing art to the big screen. Over the past ten years they have produced 36 films on artists including Leonardo da Vinci, Vincent van Gogh, Rembrandt, Hockney, Frida Kahlo, Vermeer and many more. Exhibition on Screen now plays in 1500 cinemas and 60+ countries worldwide.

For their tenth season, October 2022 to May 2023, they have announced four new cinematic releases, beginning with Hopper: An American Love story. To be followed by:
Mary Cassatt: Painting the Modern Woman. Release date March 8, 2023.
Vermeer: The Blockbuster Exhibition. Release date April 20, 2023.
Tokyo Stories. Release date May 25, 2023.

The season will also include encore releases of:
Cézanne: Portraits of a Life. Release date December 1, 2022.
I, Claude Monet. Release date July 13, 2023.

Exhibition on Screen founder Phil Grabsky says, “I’m thrilled that we are celebrating our tenth anniversary this year with the release of four fantastic films documenting such varied and diverse art. We’re excited for audiences around the world to travel through the centuries and across continents with us, to learn more about these exceptional artists and their work.”