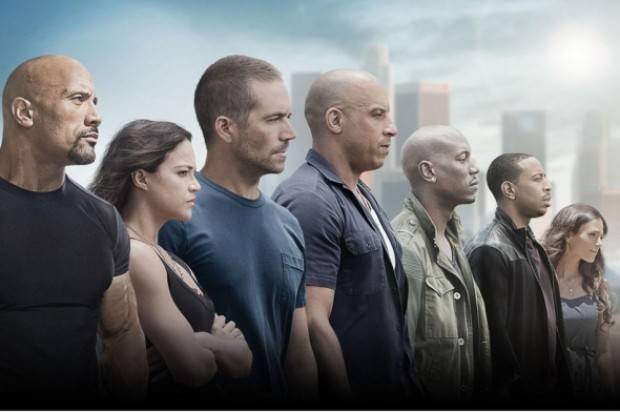 In the ‘Fast and Furious’ universe no stunt is too impossible, no boundary is too restrictive, and, just as we have come to expect, this sixth sequel’s rotation is heavy on speed, pluck, physicality and, most importantly, family. The brotherly bond between ex-convict Dominic Toretto (Vin Diesel) and FBI agent Brian O’Connor (Paul Walker) has always been one of the strongest undercurrents running throughout the series, grounding the outlandish narrative whenever it can, and in ‘Fast and Furious 7’ (or ‘Furious 7’ as it’s also being referred to) it is at its peak. With this film arriving in cinemas clouded by the tragic death of Walker – the actor involved in a fatal car accident prior to filming had completed – there’s a natural curiosity as to how the filmmakers kept production moving given Walker’s prominence in the story, and just as its predecessors showcased the joyous brotherhood between Dom and Brian, ‘Furious 7’ is the ultimate celebration of the connection between Diesel and Walker.

The plot itself is a surprisingly detailed affair (enough to fill a chunk of the 140 minute running time) which initially sets up Dom’s desire to kickstart his relationship with amnesiac squeeze Letty (Michelle Rodriguez, armed with attitude-a-plenty), and Brian’s uncomfortable adjustment to domestic life as a husband (to Jordana Brewster’s woefully underused Mia) and father; and if you’re asking who or why about any of these characters and their situations, there’s no place for you in this adrenaline-charged world. Naturally, a supervillain of sorts makes their presence felt, and Dom, Brian, Letty, fast-talker Roman (Tyrese Gibson) and tech expert Taj (Chris “Ludacris” Bridges) reunite under the direction of Intelligence Officer Petty (Kurt Russell) in order to track down Deckard Shaw (Jason Statham), a cold-blooded British black ops assassin who also happens to be the big brother of Owen Shaw (Luke Evans), the international criminal who was thwarted by the ‘Fast’ crew in entry no.6. Elsewhere a mercenary known as Jakande (Djimon Honsou), and an elusive hacker called Ramsey (Nathalie Emmanuel) set the majority of the plot into motion with the latter’s app creation “God’s Eye” being highly sought after as it essentially turns every camera and audio device into a traceable commodity; perfect fodder for a covetous character like Jakande.

As the film travels from the familiar neighbourhoods of Los Angeles to the decadent landscape of Abu Dhabi, by way of the remote Azerbaijan, ‘Furious 7’ never fails to make the most of its unique locales, setting up countless heart-stopping sequences along the way that range from a series of cars driving out of the back of a flying plane (complete with heavy-duty parachutes to guide their landing) to an absolutely insane moment where Diesel drives his car out of a skyscraper window only to land…well it’s best to witness this scene for yourself; the colourful Abu Dhabi party sequence also allowing Rodriguez to squeeze in a much-needed girlfight with MMA champion Ronda Rousey which, despite the additions of chic gowns and stilettos, is anything but elegant. Taking over the reins from director Justin Lin (who had helmed all previous entries from part 3, ‘Tokyo Drift’, onwards) Australian born James Wan, best known for horror projects such as ‘Saw’ and ‘The Conjuring’, hasn’t done much to establish his own identity behind the camera with this entry, but he’s still owed tremendous credit for keeping the excitement alive, successfully collaborating with a skilled team of editors who manage to both keep the action somehow decipherable despite its lunacy, and convince us that Walker is still with us in every frame he appears.

To save audience members from sitting through the final credits in hopes of an epilogue pertaining to ‘Fast and Furious 8’, a next instalment isn’t hinted at in any direct terms, although the fates of certain characters and the closing words from hulking Security Service agent Hobbs (Dwayne Johnson, once again seemingly growing in size between takes) indicate further adventures are not out of the question. It’s Walker’s presence though that serves as this film’s most notable trait, the charismatic actor receiving the most fitting of tributes in turn with the respectful retirement of his character; as Diesel’s trademark gravelly baritone states “it’s never goodbye”, ‘Furious 7’ sends the star off onto his final ride, one that we all feel privileged to of joined him on.