Film ‘A Million Ways to Die In The West’ Review 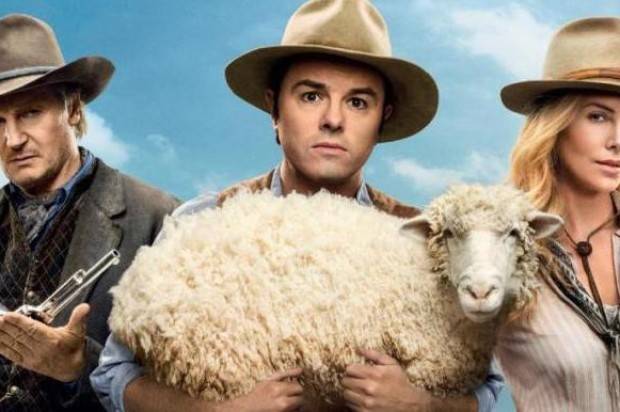 CINEMA RELEASE: A MILLION WAYS TO DIE IN THE WEST

As to be expected from the non-sensical mind of Seth MacFarlane (the creator behind such animated television fare as ‘Family Guy’ and the 2012 feature ‘Ted’), ‘A Million Ways To Die in the West’ is an expletive laced romp with its mind firmly placed in the gutter and the most juvenile of mentalities. Shouldering the duties of star, writer, producer and director, MacFarlane bares all and though there are many instances that could have been more amusing, and perhaps a sheep genitalia joke or two could have been exorcised, for the most part ‘A Million Ways…’ manages to entertain with a somewhat innocent appeal that radiates from the smutty nonsense.

Establishing itself in the 19th century with sweeping imagery of the expansive desert (the cinematography from Michael Barrett proving a real stand-out), we first meet MacFarlane’s cowardly antagonist Albert as he does his best to back out of a gunfight, and in doing so incurs the annoyance of his fickle girlfriend Louise (Amanda Seyfried) who promptly leaves him – after all people are living until they are 35 in the old west and a girl can’t just settle. It’s evident from the get-go that Albert isn’t built to survive his current surroundings, a situational joke touched upon many a time throughout, and Louise isn’t the only possession he’s unable to hold on to as a running gag involving his many wayward sheep is re-visited with relative frequency.

The earlier moments of ‘A Million Ways…’ prove the most taxing as the jokes fly at a constant rate but rarely do they hit their mark, it isn’t until Charlize Theron’s mysterious Anna swings into town that MacFarlane starts to concentrate on producing a satisfying comedy. Theron has rarely been given the chance in her career to perform broad comedy, and though she’s very much playing it straight, she’s clearly enjoying herself. Similarly is her on-screen husband Liam Neeson, perfecting the villainous swagger as the most feared gunslinger in the west, who may have limited screentime overall, but dominates every frame he’s in with an equal blend of deadpan humour and self-deprecation.

With Albert’s sole reasoning to better himself and improve on his marksman skills deriving from his dumping at the hands of Louise, it’s a shame such a prominent plot point isn’t supported by a particularly interesting performance from Seyfried. The appealing young starlet has shown her unique comic timing previously (one only has to view her breakout in 2004’s ‘Mean Girls’ for proof) so it’s a mystery as to why she saddled herself here with such a bland role, one that doesn’t even particularly benefit from her aesthetics; although there is a neat joke at her expense in relation to her rather large eyes which produced a decent chuckle from the audience. It isn’t Seyfried’s fault per se, and at least her scenes aren’t boring as she quickly takes up time with the cocky, and very moustached, Foy (Neil Patrick Harris) who follows up his own quips with a distinct self-affirming giggle that proves one of the film’s funniest ingredients.

A subplot involving Albert’s best friend Edward (Giovanni Ribisi) and his desire to fornicate with his prostituting girlfriend Ruth (Sarah Silverman) provides some of the biggest laughs, and thankfully stretches itself just enough before it becomes tiresome and overdone. Many of the jokes derived from Ruth’s profession test the boundaries of common decency, but alongside a psychedelic fantasy sequence complete with dancing sheep, they’re undoubtedly in the higher region of success in terms of joke satisfaction; a slew of high-profile cameos, however desperately topical they tend to be, also hit the right mark.

Though there isn’t as strong a consistency as there was with his last feature ‘Ted’, or even on his shows ‘Family Guy’ and ‘American Dad’, MacFarlane still has shown he’s up to the challenge of big-screen adult comedy. Suffering slightly from the dreaded sophomore slump, ‘A Million Ways To Die in the West’ still provides enough decent hits for MacFarlane to secure himself a third go-around – preferably with less animal genitalia.