Amcomri Entertainment Bible stories film productions Rise of the antichrist sequels by Caroline Russo | on May 12, 2022 | 0 comments | in Film News | Like it 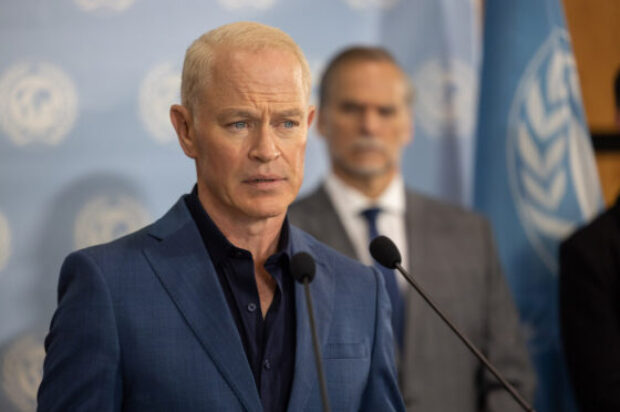 THE FOLLOW UP TO THE 2014 END TIMES THRILLER LEFT BEHIND, STARRING NICOLAS CAGE, LEFT BEHIND: RISE OF THE ANTICHRIST DELIVERS AN UPDATED STORYLINE THAT SHOWS HOW TODAY’S EVENTS ARE SETTING THE STAGE FOR THE RETURN OF CHRIST AND THE COMING APOCALYPSE.

KEVIN SORBO, NEAL MCDONOUGH, CORBIN BERNSEN AND BAILEY CHASE LEAD A TALENTED ENSEMBLE CAST INTO THE NEXT CHAPTER OF THE MEGA-HIT LEFT BEHIND FILM FRANCHISE, BASED ON THE 80 MILLION COPY BESTSELLING BOOK SERIES OF THE SAME NAME.

Millions of devout fans of the Bible prophecy-themed Left Behind films and book series (authored by the late Tim LaHaye and Jerry B. Jenkins) eagerly await the now completed sequel to 2014’s Left Behind, which featured Nicolas Cage. Left Behind: Rise of the Antichrist follows the original characters and storylines of the books, but its fictional world, originally conceived in the mid-nineties, has been thoroughly updated to parallel the world as it looks today, complete with references to current events like the Covid pandemic. Left Behind: Rise of the Antichrist is directed by and stars Kevin Sorbo (Hercules: The Legendary Journeys, God’s Not Dead, Let There Be Light), one of the biggest and most recognized names in the multibillion-dollar faith-based film industry; Neal McDonough (Band of Brothers, Captain America: The First Avenger, Minority Report) who has a combined North American box office of more than $1 Billion, along with a nearly matching global box office of close to $800 Million; award-winning veteran actor Corbin Bernsen (LA Law, Kiss Kiss Bang Bang, City On a Hill); and Bailey Chase (Longmire, Batman v Superman: Dawn of Justice). The apocalyptic thriller also stars Greg Perrow (Drop Dead Diva, Sleepy Hollow, FBI) and Sarah Fisher (Degrassi: The Next Generation, Kiss and Cry, #Roxy) who are already making waves for their buzz-worthy performances.

Sales of the globally recognized film brand continues to exceed expectations, but the state of the world at present indicates that far more than their millions-strong international fanbase will be watching.

“We are seeing a renewed and overwhelming interest in the end times, and when you look at the world today, it’s really not surprising,” says Left Behind: Rise of the Antichrist producer and co-writer, Paul Lalonde who is also founder and CEO of film studio, Cloud Ten Pictures.

Lalonde talks about two previous times in recent history when the world looked to prophecy for answers.

“The first was in the 1970s when Hal Lindsey’s book, The Late Great Planet Earth became the number-one-selling non-fiction title of the decade. The second was around the turn of the millennium when the Left Behind book series exploded onto the New York Times Bestseller list and the first Left Behind movie held the title of the number one selling independent film in the first year of its release.”

“What made those times unique? Uncertainty was part of it,” according to Lalonde. “Uncertainty brought on by a fear of the unknown and a loss of trust in those we once thought to be watching out for us. In the 70s you had so many things happening that parallel what we are seeing today, only now it’s times ten. Watergate and the Pentagon Papers eroded trust in government. Inflation was rampant. Oil prices were through the roof with the OPEC nations uniting against The West for supporting Israel. The 70’s saw much of pop culture being defined by ‘the hippies’ and the moral fiber of the western world was forever changed with even the most closely held societal norms being challenged and redefined. Later around 2000, you saw the whole Y2K panic, another impeached president, and the terror attacks of 9-11. For the first time Americans were afraid on their own soil, and once again, Bible prophecy rocketed back into the daily conversation.”

Lalonde adds, “The current political, social, and global climate is creating a perfect storm for an even greater revival of interest in what the Bible has to say about it all. None of what you see on the news is surprising if you have the roadmap in your hand,” insists Lalonde. “We know what is going to happen, so seeing the steps being taken to get us there is a continual, daily reminder that those ancient prophets thousands of years ago really did see the future. And that future that they saw is happening right now and we all have front row seats to both the most glorious and the most terrifying events that will ever come upon the world.”

Left Behind Follows a group of those left behind after millions of people suddenly vanish into thin air. The prophesied Great Tribulation has begun, and as Satan’s counterfeit messiah, a man the Bible calls “the antichrist”, begins to weave his web of lies, everyone must choose a side – and the stakes have never been higher. Rise of the Antichrist is set approximately 6 months after the mass vanishings, which were the focus of the 2014 film.