FILM COFFINED AT 15 PREMIERES AT DANCES WITH FILMS

Afghan Refugees DANCES WITH FILMS indian films Larry namer by Caroline Russo | on June 13, 2022 | 0 comments | in Film Festival | Like it 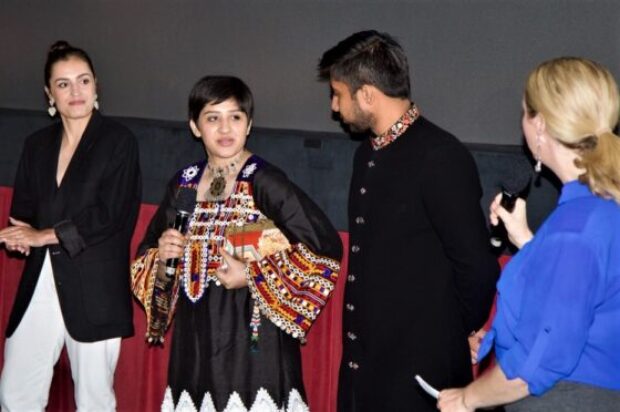 Coffined at 15 by American female filmmaker Gayatri Kumar had its world premiere at Dances With Films on Sunday, June 12 at 5 pm at the TCL Chinese Theatres in Hollywood, California. The film that was inspired by Kumar’s conversation with a child bride in Afghanistan, uncovers a new perspective on the topic in a country where very young girls are sold to be married.

Shot in Noida, India, the film is set in present day Afghanistan – one of most dangerous places for women today. Fifteen-year-old Rihana is put into a coffin at the hands of her father to be sold off to an old Taliban soldier. The wedding is a cocktail of tears and laughter. Rihana calls for help but no one answers. Then she remembers her God. With a cast consisting of Afghan refugees, this short film showcases real tears and fears from those who have been victims at the hands of the Taliban.

“You don’t have to leave Earth to find hell. It exists in a country called Afghanistan where girls as young as two-months-old are sold off into marriage. Coffined At 15 is my experiment in preparing a global audience to empathize with a plight they’ve never experienced,” comments Kumar. “The film may be short, but it’s not about how long it runs on the screen. It’s about how long it lasts in your hearts. I’m proud to say this has film has a long shelf life. It’s something that our team will keep in their hearts and take to their graves.” In attendance was E! founder Larry Namer who commented, “Coffined at 15 is a great example of how innovative young filmmakers are bringing some of the harsh realities of this world to the front of our consciousness. I applaud the team behind this film for the way in they captured the horror of modern day Afghanistan for women and presented it in a way that seemed factual and not overly politicized.”

In casting the film, Kumar experimented with a new approach of democratic filmmaking that had nothing to do with politics, and everything to do with sharing the creative journey with those who inspired her film. All of the characters in the film were not played by actors but by actual Afghan refugees who fled to Delhi, India after facing harassment and trauma at the hands of the Taliban. Kumar and research analyst Sonia Quraishi, who was also traumatized by the Taliban, literally went door to door to cast the film. While many were afraid to participate, the refugees cast in the short showed great bravery and wanted their people’s voices heard. With the help of acting coach Gulshan Walia, Kumar was able to get the cast members ready for their first film shoot in only five days.

By casting refugees, this film has given Afghans ownership and earnings over their own tears and stories, instead of having the profits go to professional actors. The tears and fears in the film are all real and have become a mobilizing call to action for the entire world. Kumar was inspired to cast non-actor Afghan refugees because of the conversation she had with the Afghan refugee girl who said she wants to be an actor but will probably end up becoming a housewife.

Nasib Popal, who plays the role of the bride’s father says: “I know we won’t be able to go back to our country and loved ones after doing this film, but that’s a risk we will have to take if we have any chance at making our voices heard.”

As a female filmmaker who makes films on women-based issues, it seemed impossible to Kumar that anyone could let such a subject matter slip through the cracks. “America is a country that will spend millions to save endangered species in distant lands. Why can’t they see the millions of women who are dragged like sheep to the slaughter?,” adds Kumar. The short drama is a message from an American woman to all Afghan women that we still care. The film’s team even launched a bread movement in Kabul, Afghanistan, where they’ve distributed over 3,000 bread loafs in order to prevent the sale of children.

The film is the proof of concept work for the director’s first full-length drama One Day Before Being Sold, for whose pitch was named a semifinalist in ScreenCraft’s Virtual Pitch Competition. The film’s team also includes writer Amol Bahadur and executive producer Narayan Kumar.

A novel feature in the short is its musical fight between the Taliban’s Attan (song of praise) and the country’s Azan (Muslim call to prayer). “The Taliban were also made by God. They also practice Islam. So, this film gives justice to everyone—the heroes and the villains. We had one of Bollywood’s biggest playback singers Shadab Farid sing the Taliban’s Attan in the film,” explains Kumar.

One Day Before Being Sold brings a completely new perspective on the issue of child brides in Afghanistan by diving deep into the best and worst of familial relations and by looking into the psychological torment a girl goes through, knowing that she will be sold. It is not a story of sympathy, but rather one of inspiration as it only explores the tools a poor family in rural Afghanistan has, which is, the Islamic faith.

The project was inspired by a conversation that Kumar had with a child bride in Afghanistan. The film’s team worked hard to send money to Kabul to save this child, and to this day, the family still sends photos of their daughter. The family reports, “Look, our girl is still with us.” Kumar’s conversations with the child bride left the young director with several questions, one of which is, “What does man have if he is abandoned by his government, his law, and his people?” This film will be the answer to this question.One Day Before Being Sold will be filmed in Jammu and Kashmir in the Urdu language.

Writer/director Kumar graduated from Sarah Lawrence College in 2021. She specializes in present-day issues, from which she creates extraordinary stories told through a narrative medium, in the realm of Hotel Rwanda and Schindler’s List. Kumar’s ultimate goal is to change what cinema will mean to the world by the next decade. She believes that it can do more than just entertain, even if it’s done in an entertaining way. In addition to the upcoming feature, she is also engaged in writing a limited series on the crisis in Ukraine and another series on the mothers of India’s martyrs.