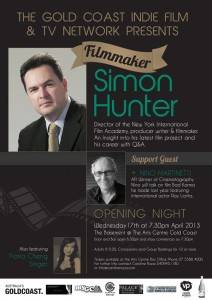 The Gold Coast Indie Film and TV Network is back on April 17th at The Arts Centre Gold Coast’s Basement. The network is delighted to present special guest, Simon Hunter, the director of New York Film Academy along with cinematographer and AFI award winner Nino Martinetti who has joined the Academy as a teacher.

Simon was born in Sydney, Australia and raised in the Midwest of the United States, Simon began making films at the age of ten. He developed his passion right through to tertiary study where he was awarded a Bachelor of Arts in Creative Writing & English Literature. He furthered his training at the Australian Film, Television and Radio School, graduating in Producing. Wanting to learn from the best, he relocated to Los Angeles and studied under some of the most experienced names in Hollywood.

Simon wrote, produced and directed over 40 documentaries for Australia’s SBS television before selling his first drama screenplay to network television. Twisted Tales: Bonus Mileage was produced by Australian icon Bryan Brown for the Nine Network Australia. Simon’s screenplay secured Academy Award winner Geoffrey Rush to star in the episode. His episode led the series to be sold to over 40 countries and was packaged as a feature length telemovie for the US market. As a result, Simon was represented by one of Hollywood’s top talent agencies, Shapiro Lichtman.

With so many credits to his name the GCIFTN is thrilled to present Simon Hunter. This will undoubtedly be an invaluable opportunity to discover more about Simon’s work in the film industry, his role as Director of the New York International Film Academy and his most recent work a feature shot on Cannon 5D over 12 days in Toowoomba.

Gold Coast local but a Roman man with heart and soul is Nino Martinetti who studied Humanities, Sciences and Art at the College Santa Maria in Rome and at the Institute Manieri-Copernico Liceo Scientifico. Soon after he was conscripted in the Army. In 1970 he moved from Rome to London to study English and there he developed his interest in photography. In 1973 Nino travelled overland from England to Australia to advance his knowledge and passion of the arts and filmmaking.

In 1977 Nino photographed his first Short film “Buckeye and Pinto” and was nominated for “Best Cinematography”. In 1980 he filmed two episodes of his first four-part Award winning TV Mini-series “Women Of The Sun”. 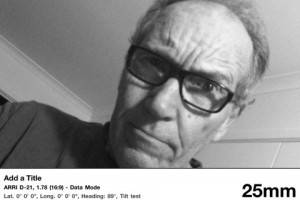 In 1984 Nino filmed his first Feature film (Anamorphic) “Wills and Burke”, an Australian Epic, thus he was granted accreditation of the Australian Cinematographers Society. Now after more than thirty-five years as a Director of Photography and Camera Operator, Nino has received five A.C.S. Bronze Awards, five A.C.S. Silver Awards and seven A.C.S. Gold Awards. He has been nominated four times for the A.F.I. (AUS) Award for “Best Cinematography”. In 1994 Nino received the A.F.I. (AUS) Award for the Feature film “Exile”.

GCIFTN is delighted to have Nino as our support guest and on the night Nino will cover questions and insight to the movie Bad Karma,  that was filmed over a year ago that had international  star actor Ray Liotta

Opening up the night will be singer Miss Fiona Cheng a young talented Singer and Songwriter with a beautiful silky smooth voice capable of singing Soul, R&B, Contemporary and Electric Dance Style.

Fiona was born and raised in China. She has been living in Brisbane for 6 years. At the age of 15 she started her formal Classical singing lessons at Shenyang Conservatory of Music where she also received a Scholarship for her vocal achievements.

Ever since her graduation in Bachelor of Music Studies at the Queensland Conservatorium of Music in 2011, Fiona has been singing and song writing in order to perfect her own Vocal Style and Musical Compositions.

The GCIFTN is a great opportunity for film and TV industry folks to engage and network with their peers in a venue that helps promote film makers. Each network brings together some of the finest talent based in South East Queensland. As always, there are lucky door prizes to win. For bookings please contact Box Office at The Arts Centre GC on 07 5588 4000.

Adults $15.00, Concessions and Group Bookings for 10 or more