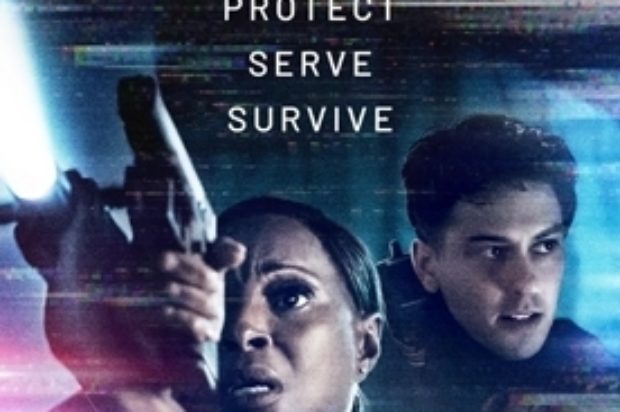 BODY CAM
Premiering on Digital Platforms for Purchase May 19
and for rent On Demand June 2 from Paramount Home Entertainment.
DVD July 14.

When a routine traffic stop results in the unexplained, grisly death of her colleague, a cop (Mary J. Blige) realizes footage of the incident will play for her eyes only. As the attacks mount, she races to understand the supernatural force behind them.

ABOUT MARY J. BLIGE
Iconic Grammy Award-winning singer, songwriter, actress, producer and philanthropist, Mary J. Blige is a figure of inspiration, transformation and empowerment making her one of the defining voices of the contemporary music era. With a track record of eight multi-platinum albums, nine Grammy Awards (plus a staggering 32 nominations), two Academy Award nominations, two Golden Globe nominations, and a SAG nomination, among many other accolades, Blige has cemented herself as a global superstar. And in the ensuing years, the singer/songwriter has attracted an intensely loyal fan base—responsible for propelling worldwide sales of more than 50 million albums.

Blige brought her own gritty, urban-rooted style—fusing hip-hop, soul and honest, frank lyrics—to the forefront on her 1992 debut album What’s the 411? The multi-platinum set, executive produced by Sean “Diddy” Combs, quickly spun off several hits. Blige helped redefine R&B and began forging a unique niche for herself on the more personal second album, 1994’s My Life.

And thus began the Blige movement: connecting legions of fans that identify with and have accompanied her throughout her personal travails and growth—all fearlessly related through her music. Each subsequent album reads like a chapter from an autobiography: Share My World (1997), Mary (1999), No More Drama (2001), Love & Life (2003), the multiple Grammy-winning and hit-spewing The Breakthrough (2005), Growing Pains (2007), Stronger with Each Tear (2009), My Life II… The Journey Continues (2011), A Mary Christmas (2013) and The London Sessions (2014). Along the way, she’s lined up a string of hit singles, including Not Gon’ Cry, Love Is All We Need, Seven Days, All That I Can Say, Family Affair and Just Fine. Blige most recently released her 14th studio album Strength of a Woman in 2017.

On the acting side, Blige starred as Florence Jackson in the 2017 Netflix breakout film MUDBOUND, for which she received critical acclaim including two Academy Award nominations for Best Supporting Actress and Best Original Song. She starred in the Netflix series THE UMBRELLA ACADEMY, which premiered on the platform in February 2019. On the producing side, Blige launched her own production company, Blue Butterfly, and signed a first-look TV deal with Lionsgate.

Most recently, Blige voiced a character in Dreamworks’ TROLLS WORLD TOUR and was an executive producer alongside Queen Latifah and Missy Elliot on LIFETIME’s THE CLARK SISTERS: FIRST LADIES OF GOSPEL.

Next up, Blige will star in Kerem Sanga’s The Violent Heart and under her production company Blue Butterfly, Blige is serving as the Executive Producer on the Vanessa Roth Untitled Documentary about Blige’s legendary career. She will also star in MGM’s Aretha Franklin biopic, Respect, as jazz singer Dinah Washington, set for release Christmas Day. Blige is currently filming STARZ’s POWER BOOK II: GHOST, a new television series inspired by the original show, POWER.

ABOUT NAT WOLFF
Best known for critically praised roles in diverse films such as Palo Alto and Ashby, actor/musician Nat Wolff is building his resume as a formidable film star, with such feats as a spot on Variety’s Youth Impact list and as the recipient of the 2015 “Star of Tomorrow” award at CinemaCon.

Next up, Wolff will be seen in CBS All Access’ Stephen King adaptation The Stand. Wolff is set to make his directorial debut with Youngest, a short film that will star June Van Patten, Austin Abrams and Michael Gandolfini. Other upcoming projects include fantasy adventure Mortal; comedic-drama Good Posture, alongside Grace Van Patten and Emily Mortimer; and Gia Coppola’s Mainstream, with Maya Hawke, Alexa Demie, and Andrew Garfield.

In 2017 Wolff starred in the animated feature Leap!; Home Again opposite Reese Witherspoon and Michael Sheen; and the indie thriller, Rosy.

In the dramedy Ashby, Wolff led an all-star cast including Mickey Rourke and Sarah Silverman. The film focused on the relationship between a high school student (Wolff) and a retired CIA assassin (Mickey Rourke), which premiered to rave reviews at the 2015 Tribeca Film Festival. In July 2015, Wolff starred in Paper Towns, FOX’s film adaptation of the John Green best-selling novel, which re-united him with The Fault in Our Stars team.

In 2014’s The Fault in Our Stars – which grossed over $300 million worldwide — Wolff gave a scene-stealing performance as Isaac, a blind teenager battling cancer. In Palo Alto, directed and adapted by Gia Coppola from James Franco’s collection of short stories, Wolff delivered a gripping performance as an angry, damaged and oddly charming antihero. Palo Alto premiered to critical success at the Venice, Toronto and Telluride Film Festivals.

On the music side, Wolff is releasing new singles with his brother, Alex Wolff, under the moniker Nat & Alex Wolff. Their latest songs are currently available on iTunes.

His other recent television credits include Saint George (FX), Seven Seconds (Netflix), Blue Bloods (CBS), Quantico (ABC), and The Guest Book (TBS). While working on the crime drama The Beat, Zayas met Emmy Award®-winning television writer and producer Tom Fontana, who went on to create the role of “Enrique Morales” on HBO’s Oz especially for him.

On film, he has starred in The Expendables, Skyline, 13, Michael Clayton, Sixteen Blocks, The Savages, Bringing Out the Dead, The Yards, Undefeated, Wit, Angel, and The Interpreter. David also starred opposite Helen Hunt in the indie feature Ride, starred opposite Ellen Page and Allison Janney in the feature Tallulah, as ‘Ramon’ in Shine (13 Paces), and appeared in the film remake of the 1982 movie musical Annie opposite Jamie Foxx and Cameron Diaz. Upcoming features include ‘John the Baptist’ in Force of Nature (Lionsgate), and ‘Fernado Capulet’ in R#J.

A former New York police officer, Zayas began his acting career with LAByrinth Theater Company in 1992. He has starred in more than thirty theater productions, most with The LAByrinth Theater Company, including: “Jesus Hopped the ‘A’ Train,” “In Arabia We’d All Be Kings,” “Our Lady of 121 St.,” and the Pulitzer Prize®-winning “Anna in the Tropics” on Broadway.

ABOUT DIRECTOR MALIK VITTHAL
Born and raised in Los Angeles, Malik Vitthal graduated from the University of Southern California’s School of Cinematic Arts. He co-wrote his feature directorial debut Imperial Dreams, which was developed at the Sundance Institute Screenwriters Lab and the Jerusalem International Film Lab. Imperial Dreams premiered at the Sundance Film Festival, where it won the Audience Award: Best of Next.