FILM OF THE MONTH : DUNKIRK 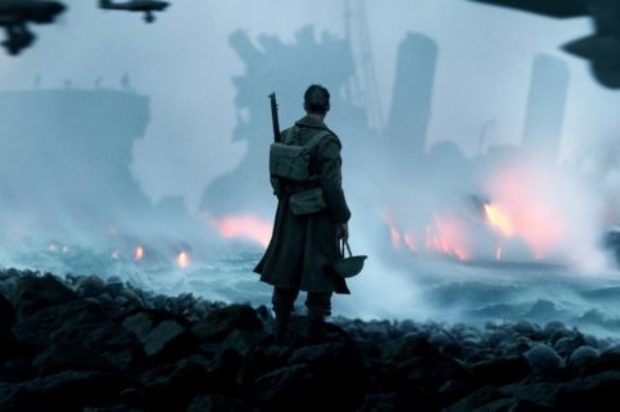 As modern filmmakers go, Christopher Nolan is arguably one of the most consistent working today. His back-catalogue is a platter of brilliance, and ‘Dunkirk’ assuredly stands as his most competent to date. At a brisk 106 minutes, Nolan’s beautifully disciplined film shaves any unnecessary fat off its bone and presents an intoxicating, tension-filled ride that grips you from the very first frame and refuses to let you go before the final credits roll.

Adopting an almost-silent cinema type mentality with the dialogue only factoring into proceedings when it needs to – no rousing, melodramatic speeches found here – ‘Dunkirk’ evokes its sense of urgency through its striking visuals, and the situational drama found here feels nothing short of terrifyingly real; the enemy remains largely unseen but the threat is ever present. As non-reliant on unmerited dialogue the film appears to be, the performances on hand don’t suffer, and Nolan’s choice to cast predominantly unknown talent in the lead roles – a decision made to coincide with how young and inexperienced the real soldiers evacuated from Dunkirk in World War II were – further allows the viewer to immerse themselves in this ferocious experience.

Fionn Whitehead’s British army private Tommy is at the centre of the film, and much of the running time is devoted to his desperation in trying to get off Dunkirk beach. Alongside the suspiciously silent Gibson (Aneurin Barnard) and fellow army private Alex (Harry Styles, the One Direction singer proving a fine thespian), survival is their only goal, and the film effortlessly succeeds at painting them in a sympathetic light – even when their darkest impulses come to fruition; a stunning sequence involving their entrapment in a sinking ship highlights their true character in the face of the direst situations.

The more well-known players on board – Cillian Murphy, Mark Rylance, Kenneth Branagh, and Tom Hardy – are all equally devoted to their respective roles, and their considerable profiles thankfully don’t overshadow their subtle work. Branagh’s fine appearance as pier-master Commander Bolton is ultimately little more than an extended cameo, and Hardy spends the majority of the film piloting an air craft with his face predominantly covered, leaving Murphy’s shivering PTSD-suffering soldier and Rylance’s gentlemanly mariner to earn more prominence; Rylance delivering the one performance of the film that is the likeliest to be singled out for an acting nomination come award season.

On a technical level, it goes without saying that ‘Dunkirk’ is simply sublime. The 70mm format print of the film is ultimately the purest way to experience this visually stellar feature, and the piercing sound design only enhances what a truly enveloping cinema experience this proves to be; Hans Zimmer’s mesmerising score alone demands the finest theatrical sound execution. A magnificent event of a film that is, without a doubt, the best feature released to date this year, ‘Dunkirk’ is that rare breed of cinema that features all the elements of a blockbuster with all the heart of a human story that we should feel privileged to witness.