FILM RELEASE AND REVIEW .. MADE IN ITALY

italy James D’Arcy liam neesion MADE IN ITALY by Caroline Russo | on August 5, 2020 | 0 comments | in Film Release & Reviews | Like it 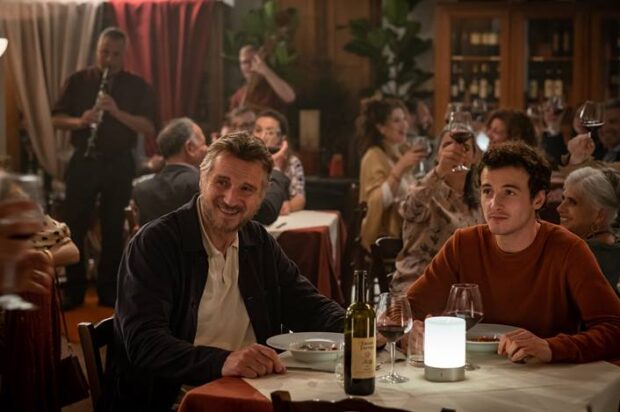 Made in Italy aims to be a heart-warming comedy set in Tuscany, starring Liam Neeson as Robert, a charming artist who returns to Italy with his estranged son Jack (Neeson’s real life son Micheál Richardson) to sell house they inherited from his late wife.

However, they are shocked to find the once glorious villa dilapidated and in a state of disrepair.
Renovations go badly, and father and son find themselves at odds once again. Robert’s comical lack of DIY experience leads him to seek help from some colourful locals, but for Jack, the state of the house seems to mirror his search for memories of happier times with his mother. Jack’s heart opens up when he meets Natalia, a vivacious Italian chef who restores both body and soul with delights from her local trattoria.
As Robert and Jack painstakingly restore the villa to its previous glory, they begin to repair their bond and imagine a different future.

Directed by James D’Arcy’s it is his feature directorial debut and was first inspired to write the film whilst on holiday in Tuscany. Originally, I had intended to play the role of Jack, but as it took over a decade from inception to fruition, I grew too old for the role. A different opportunity now arose as by this time I could see the film so clearly in my head that I couldn’t imagine anyone else directing it!

D’Arcy is perhaps best known for his portrayal of Edwin Jarvis in the Marvel television series Agent Carter and the 2019 film Avengers: Endgame. Other television credits include: A&E’s Those Who Kill, alongside Chloë Sevigny, ITV’s critically acclaimed Broadchurch opposite Olivia Colman and Showtime’s Homeland with Claire Danes.

Liam Nelson, was attracted to the role and states: It is a great story about family and love… And compassion and loss – and humour… I found it very cathartic in dealing with my own grief…. And to do that through one’s art, i.e. making film, was very, very unique and special.
Sometimes when you’re acting scenes and stuff, of course, you’re surrounded by crew and sometimes it’s 40-50 people but I always felt they were holding us up, you know, I mean like really supporting us because they were into the story and they wanted to tell the story. They weren’t just clocking in for another job, I just felt that real camaraderie.

This is a film that had a lot of predictable plots but still enjoyable as it is set in Italy, and it is a very different role for Nelson where there is no chase, killing or gun.