In 1979 during the Iranian revolution, a group of radicals stormed the American embassy and held everyone inside hostage bar six U.S. diplomats who managed to escape unharmed and eventually sought refuge in the home of the Canadian ambassador.  In an attempt to rescue them a technical operations officer for the CIA was called in to devise a strategy that would hopefully result in their safety.  His plan was to enter the country posing as a film producer and leave with the crew of six under the guise as his crew.  Sounds simple enough right? 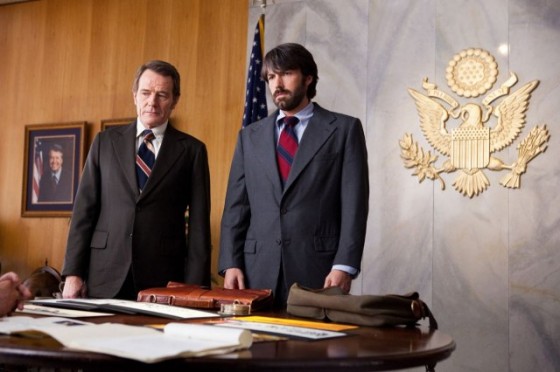 With an idea that sounds as far-fetched as what’s mentioned above, ‘Argo’ should be somewhat of an unbelievable farce, an idea far too crazy even for Hollywood standards, but amazingly it’s not only true, but by far one of the best, if not the best, 2012 has to offer.  Seamlessly blending stock footage from the actual news accounts of the era with the drama unfolding on-screen, the film has an air of eerie reality about it that constantly reminds the audience what they’re experiencing actually happened.  You only have to look at the detailed recreation of the takeover during the opening sequence for proof as the scenes of men and women being taken away at gunpoint and the Iranian locals practically crawling on top of each other to gain access to the embassy are as nerve-wracking as each other.

Whilst the six take shelter with the Canadian ambassador (played here by Victor Garber), in the US Tony Mendez (Ben Affleck), a CIA technical operations officer, is called upon for his idea on how to safely extract them – enter ‘Argo’.  ‘Argo’ is the name of a science-fiction film, not unlike ‘Star Wars’, that is created for the sole purpose of the extraction, and helping lend credibility to the project Mendez, with the assistance of his supervisor (Bryan Cranston), calls in legendary Hollywood make-up artist John Chambers (John Goodman) and producer Lester Siegel (Alan Arkin) to essentially back the venture.  The scenes involving Chambers, Siegel and the creation of the space epic that never-was is where the film allows its audience to catch their breath, injecting some much needed humour into the story without jeopardising the film’s integrity.  Goodman and, in particular, Arkin really get a chance to shine here and it’s not out of the realms of possibility to think they’ll be remunerated come Award season.

As impressive as the likes of Arkin, Goodman and Cranston are, as well as the superb turns of the actors playing the six Americans (all of whom were chosen for the uncanny resemblance they share with their real-life counterparts), and the stellar writing of Chris Terrio, the real talent of the production is Affleck.  It’s hard to believe that only a few years ago his name was synonymous with such fare as the critically panned ‘Gigli’ and ‘Surviving Christmas’, but re-branding himself as a director with both ‘Gone Baby Gone’ and ‘The Town’ has allowed the actor a career resurgence that sees him as arguably one of this generations finest filmmakers.  From the attention to detail he has crafted in the sets through to the unbearable tension he creates in one of the films closing sequences, Affleck has produced nothing short of a masterpiece, one that I dare say has already got the marketing department ready to re-release promotional material with ‘Academy Award winner 2012 for Best Film’.