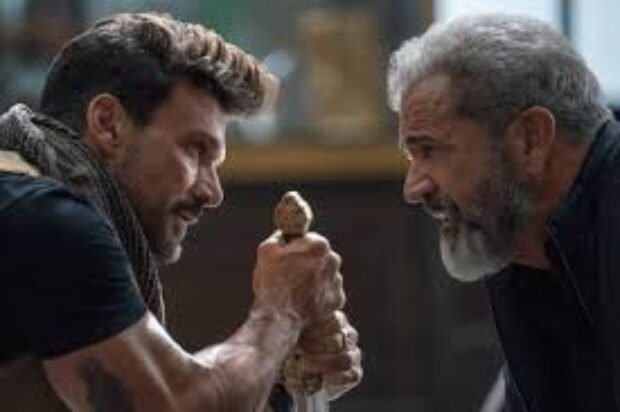 From acclaimed filmmaker JOE CARNAHAN – writer-director of NARC, SMOKIN’ ACES and THE GREY – comes BOSS LEVEL, an action-drama like no other. Roy Pulver (FRANK GRILLO) has a helluva problem: Every morning, he’s slaughtered by assassins in different ways. Sometimes he’s shot, then blown up, or beheaded, or stabbed — then that days starts anew, on and on, for reasons he can’t figure out. A former Delta Force member, Roy needs to figure out why he’s stuck in this repeating loop in time and space, how he can save his ex-wife (NAOMI WATTS) and 11-year-old son, and what an evil military scientist named Ventor (MEL GIBSON) wants with something called “The Osiris Spindle.” By setting things right, Roy can become the best version of himself – if he can save himself from being killed again.

Looked as a kick-ass action thriller with tons of heart, a lot of humor, and new styles of danger. If you saw INCEPTION; throw in the tough-talking pulpiness of BIG TROUBLE IN LITTLE CHINA; mix in the folding timelines of movies like SOURCE CODE and LOOPER; add a strong dash of Hong Kong-style action coolness; spice it up with mind-bending sci-fi muscle and modern videogame mayhem; chuck in a little GROUNDHOG DAY while you’re at it; then spin it all up to a razor’s edge and you get BOSS LEVEL, writer-director Joe Carnahan’s raucous, risk-taking action adventure that puts its hero through hell until he discovers why he keeps getting new chances to be the man he needs to be — one cranked-up death at a time.

The journey to BOSS LEVEL began when writer-director Joe Carnahan read a script that had elements he liked but which still needed work to bust through.

“The original script was called Continue, and it was written by two brothers, Chris and Eddie Borey,” says Carnahan. “I thought it was very inventive and smart. But what I really loved about it was this idea of a guy who’s been an absentee father and husband who, through a sci-fi plot twist, experiences a repeating moment in which — if he has enough attempts — he can right the wrongs he’s done and redeem himself in the eyes of the people he loves.”

“I started rewriting it, and I added what I thought was a crucial emotional core,” says Carnahan. “Because without that, a movie like this would just seem like a gimmick. You’d think, ok, the guy is resurrected every day, but to what end? The movie needed higher emotional stakes.”

Carnahan’s new version upped the ante. Roy Pulver (FRANK GRILLO), a former Delta Force captain, is mysterious stuck in a time loop, which he discovers has some connection to his ex-wife Dr. Jemma Wells (Oscarã nominee NAOMI WATTS), a brilliant scientist employed by Col. Clive Ventor (Oscarã winner MEL GIBSON). When Roy becomes an unwitting part of Ventor’s plan to use a powerful machine called the Osiris Spindle, he’s attacked day after day by an array of assassins sent out by Ventor’s head of security Brett Dynow (WILL SASSO) — who all keep coming after Roy on the same day, in the same way, because every time Roy gets killed he immediately wakes up as he did last time. But with each “Attempted Kill,” Roy gathers more clues to the terrifying truth. On his way to stop it all, he discovers a bridge that could help him bond with his 11-year-old son, Joe (RIO GRILLO), who would rather play competitive first-person-fighter videogames than go to school.
charm.

All in all director sums’s up “I think what BOSS LEVEL does for the action genre is, it turns it all upside-down,” says Grillo. “It’s not a standard thriller, and it’s not a straightforward, linear action movie. It’s an action movie that’s got a lot of laughs, a lot of dark humor, and lots of gravitas because of Roy’s connection to his ex-wife and son. We tried to create something new in the genre: A stew containing all these different elements.”

The energy of making the film got a lot of back up from the cast such as Mel Gibson, expressed “I’ve always loved Joe, I’ve known him for years. So if he throws down, he’s making something, I want to be there with him.”

Says Carnahan, “What Mel brings to any film is really himself — he brings Mel Gibson. You look at that face and realize you’re looking at 40 years of cinema, and an incredible filmmaker as well. He’s at the top of the food chain.”

Nomia Watts says on
“Joe has an incredible energy on set, which is something you have to have for this kind of movie,”
“Not only that, but he’s also impressively precise with his choices — and such a lovely guy. I loved working with him.” plus “I always love a new challenge!” “My first day on set was the production’s fifteenth day or so of shooting, and coming in, it definitely felt like stepping into a boys’ club.” Which fits, because, as Watts adds, “The film is a wild testosterone ride of mayhem.”

“BOSS LEVEL isn’t my usual kind of film,” Watts says, “but it really was as much fun on the page as it was to shoot!”

Adds Sasso, “Working with Joe is great because there’s that safety net of knowing that he knows this stuff so well. Aside from being a skilled writer-director and knowing the process front-to-back, Joe understood this script inside-out. It’s a luxury for an actor to be able to ask a director at any point in a production how even the smallest detail relates to the entire story and get a full, thoughtful answer.”

Grillo says that one reason he and Carnahan became partners in Warparty Pictures was because the pair saw filmmaking in the same way. “It’s not about billion-dollar franchises, it’s not about big movie stars,” says Grillo. “It’s about finding cool stories and, while telling them, creating an atmosphere that makes everybody around us happy. So we had the same mission, and we formed this company. Now, I don’t just get to work with my favorite director — he’s my business partner, too.”

Overall “Boss Level” is fast and full of special effects and with a great line up and is appealing for the young audience that gives them the thrills. For other viewers, I am sure this will find this exhausting and see the similar by lines of other action films and it does have a lot of Deadpool and groundhog day feel to it. I am big Mel Gibson fan and its always good to watch him on screen.

Must watch in the cinema and it’s out now.