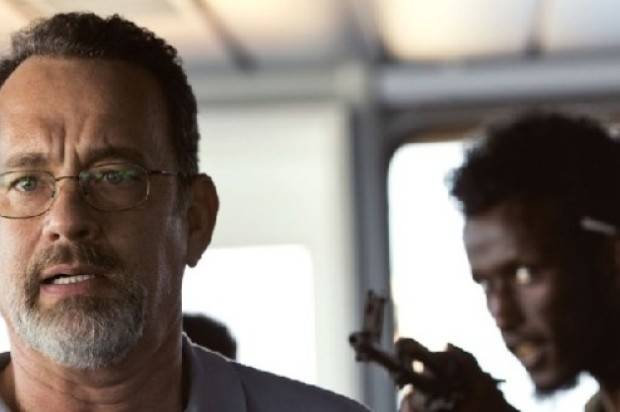 CINEMA RELEASE: CAPTAIN PHILLIPS
Release date: 24th October 2013
Director: Paul Greengrass
Cast: Tom Hanks, Catherine Keener
Classification: M (Mature Themes and Violence)
Review by Peter Gray
After a slew of underwhelming films (‘The DaVinci Code’, ‘Angels & Demons’, ‘Larry Crowne’, ‘Extremely Loud and Incredibly Close’) it’s a pleasure to once again see Tom Hanks at the top of his game in a production that is worthy of his talents. As the titular ‘Captain Phillips’ Hanks has delivered what is quite possibly his finest performance since 2002’s ‘Road To Perdition’, one that I dare say will place him in the Best Actor race come award season. A true tale detailing a merchant marine vessel being boarded by Somali pirates, ‘Captain Phillips’ is real edge-of-your-seat type fare regardless of how familiar you are with the true story behind Phillips’ ordeal with the pirates who eventually took him hostage.
Marrying the uncomfortably realistic styling of his previous film ‘United 93’ with the more audience-pleasing appeal of the ‘Bourne’ series director Paul Greengrass has sculpted a film that should satisfy crowds and critics across the board. Despite this tact though, ‘Captain Phillips’ wisely doesn’t succumb to melodrama leaving all the focus on Phillips and his ordeal on the boat with no cutaways to his family back home. In a brief scene that opens the film Phillips’ wife is played by Catherine Keener, and after an awkwardly delivered segment between the two, Phillips’ tribulation on the boat is what the 130 minute running time is confined to.
As easy as it would’ve been to portray the Somali pirates in a stereotypical fashion, and you imagine in a more patriotic film they would appear almost cardboard, Greengrass has opted to treat the characters with a little compassion. The film never condones their actions but we at least understand their motivation, and it makes for a terrifying experience as the Somali set scenes that are spot lit early in the film detail a devastating existence for these men, and you realise with how little they have to lose their actions are all the more chilling.
With audience sympathy aimed squarely at the often resourceful Captain, and the Somali pirates very much the villains of the situation, and not misunderstood victims of circumstance – something addressed by Phillips later in the film – Greengrass proves he’s not above staging high-octane action sequences, because at the end of the day it’s still a film, and the climactic moments featuring a navy SEAL assault is masterfully crafted. The level of tension created is unbearable yet there’s nothing overly “Hollywood” about it, a similar feeling experienced earlier in the year with ‘Zero Dark Thirty’.
Apart from the aforementioned opening scene with Phillips and his wife which is frustrating in its poor delivery from both actors, there’s really very little wrong with ‘Captain Phillips’. A career highlight for both Hanks and Greengrass, my only real complaint would be it’s the kind of film you can only experience once as so much of its excitement, tension and emotion is derived from a natural place of never knowing what is coming next.
My rating 4.5/5 (A voyage worth taking)