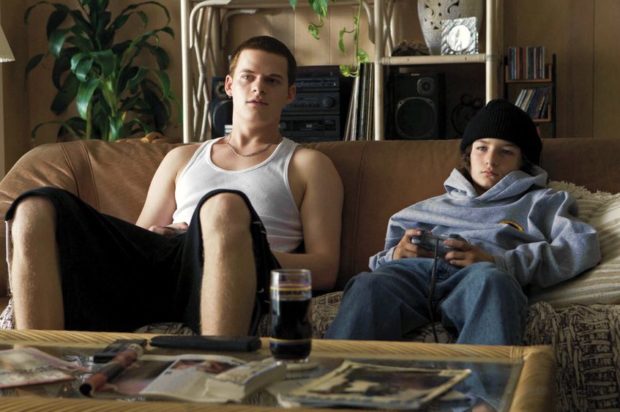 Jonah Hill has taken to directing and writing this is his very first feature that is a story surrounding a young kid 13-year-old Stevie (Sunny Suljic) who is from a broken family where he is pulling away and looking for any form of escape due to a brother that is a bully played by (Lucas Hedges) and his mother (Katherine Waterson) who he finds too overbearing.

Stevie is looking to fit in with a group of skateboard dudes who are all misfits that hang out in the local shop is drawn into a gang of skaters cue ball-headed sociopath Ruben — “Don’t thank me; that’s gay” (Galicia); Fuckshit (Prenatt), who earns his monicker by starting each sentence with, “Fuck! Shit!”; Fourth Grade, a dim but sweet Spike Jonze wannabe never seen without a camcorder; and Ray (Smith), the older de facto leader who dreams of becoming a pro skateboarder.

Young actor Suljic playing the lead is so appealing on camera and acts out exceptionally well that he does about steals all the scenes.

Jonah Hill’s directorial debut, mid90s, is a fantastic” shot on 16 mill and for the fact that at times in the film the language is pretty ripe and it sure can be aggressive but it carries the film and with all its characters and flow well in capturing all the sequences where at the end of this film you feel quite satisfied.