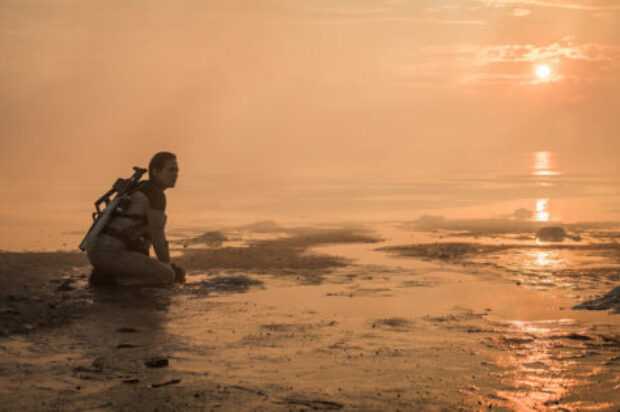 The Colony is an intense Sci-Fi that is placed in the dark future when Earth becomes uninhabitable for humans, with the ruling elite settle on Planet Kepler 209. But its atmosphere makes the new inhabitants sterile. Two generations later the ULYSSES programme is set up to determine whether life is possible on Earth again. Mission Ulysses II is launched to confirm it one way or the other. The space capsule loses control when it hits Earth’s atmosphere. Blake (NORA ARNEZEDER) is the only astronaut to survive the landing – but she finds out that she is not alone on Earth. A fight for survival begins and Blake has to make decisions that will determine the fate of humanity.

After their successful cooperation on HELL (2011), director Tim Fehlbaum wanted to continue working with producer Thomas Wöbke. This lead to
this new film which carries two titles of the film “Tides” “The Colony”.

The vision was larger and more on an international scale that has brought together a collaboration of inspired talented creatives and choice casting of lead actor Blake (NORA ARNEZEDER) who has a lot of screen time. Great art production by Julian R Wagnerand and photography by Markus Förderer makes this quite an apocalyptic film to watch.

Produced in Germany the interest of script got a lot of support wherever we presented it Wobke states. Luckily, we were able to get Christoph Fisser from Studio Babelsberg as the first co-production partner on board. That really helped us to get over the long development process.” Looking back, Wöbke thinks they might even have submitted the screenplay too early because the material had been a long way from being ready to film at that time and still had to undergo a lot of changes and adjustments until it was ready. “This meant we put a lot of time pressure on ourselves because we constantly had to convince the funders that we were making progress”, says Philipp Trauer. “But the story was not easy to nail. There were always small details we knew we could do better. We basically worked under high pressure from genesis to shoot and drove the film onwards.

In the lead role that is demanding of playing Blake (NORA ARNEZEDER) was asked how she got the role? She remembers that I was shooting a TV show in South Africa and my agent sent me the script. I read the script, I loved it. I think it’s an amazing role that has a beautiful, interesting arc. In the beginning, Blake is almost robotic, kind of mechanical, without any emotions. And then she will learn to become more human. So I auditioned for it – and didn’t hear back for a long time. After about six months the director Tim Fehlbaum came forward, asking to skype with me. So, I skyped with him. And then I flew to Berlin, did a reading with Tim and got the part!

The production finally got the green light in April 2018. Filming was scheduled to start just five months later, in September. Another feat, this time a logistical one. “There was currently so many shoots going on in Germany that it is no longer easy to put a top team together at such short notice”, says Wöbke. “We were lucky to get Mark Nolting as line producer, who is not only one of the best in his field but who also brought his entire production team with him.”

This is a gripping science-fiction thriller that will appeal to sci-fi audience that gives a journey full of surprising twists to a unique world in which the future of humankind is at stake.

The Colney is a German-Swiss production that was shot on original locations in the German mudflats among others.