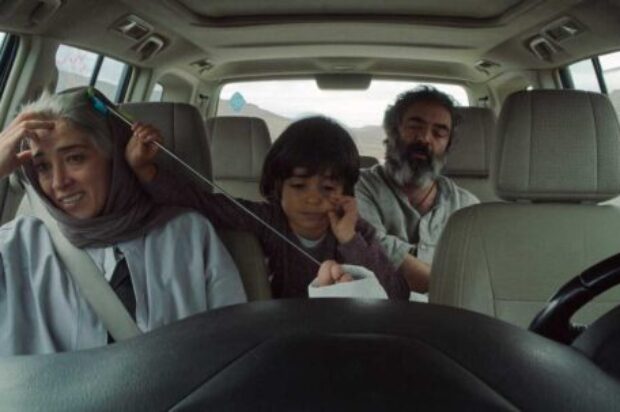 A chaotic, tender family is on a road trip across a rugged landscape, but to where? In the back seat, Dad has a broken leg, but is it really broken? Mom tries to laugh when she’s not holding back tears. The kid keeps exploding into choreographed car karaoke. All of them are fussing over the sick dog and getting on each others’ nerves.
Only the mysterious older brother is quiet.

Panah Panahi was born in Tehran in 1984 and studied cinema at the Tehran University of Art. While attending, he directed his first short film which went on to participate in and win awards at many domestic and international film festivals. At that time, Panah also served as a member of the jury at Osian’s Cinefan Festival of Asian and Arab Cinema.
Later, Panah became a set photographer, working professionally on several films, then moving into the roles of assistant cinematographer and assistant director. Eventually Panah acted as a consultant, editor and assistant director on Jafar Panahi’s most recent films.

You are the son of Jafar Panahi, who started out as Abbas Kiarostami’s assistant and disciple. We imagine that the influence of both directors gave you a taste for cinema. Did you learn to be a director directly from them,
or by watching their movies?

From childhood, I attended location scouting and was on set for my father’s and Abbas Kiarostami’s films. My parents mainly hang out with cinema people. I grew up in this environment, so I saw many films, and that inevitably formed my eyes. Still, I hardly ever talked about cinema with my father, until I was 18 or 19. When I finally told him that I wanted to study cinema, he understood that this interest had to be taken seriously. During my studies, I was able to work both as an assistant director and cinematographer to learn first-hand. I was then able to assist my father on his most recent films, from writing to post-production, and I was able to ask him all the questions I could think of. My surroundings were very conducive to my training as a filmmaker.
The closer you get to the border, the greener and more mountainous the landscape becomes. It is as if this region were more welcoming, compared to the urban areas with heightened police pressure. Is that the case ?

The journey this family goes through was not the result of my invention: it follows the natural evolution of the Iranian landscapes. As they get closer to the border, the desert plains turn into a greener area, with many hills. Of course, other factors were taken into account in the choice of each location, but this progression of the landscape corresponds with that of the country.
Is the border in the film the border with Turkey? Are smugglers and Iranians who cross the border illegally, like your character, common in reality?

Yes, it’s a common phenomenon in Iran today. I witnessed the clandestine departure of a large number of my acquaintances. The character’s journey is inspired by that of a friend who told me about his own journey. All the steps, including that of buying sheepskin, are real and accurate.

Is the dream sequence where father and son take to the stars an homage to 2001, A Space Odyssey, which you cite earlier in your film?
While writing this sequence, I realized I was indeed designing it based on the Kubrick film. I eventually decided to make it an homage, make it an explicit reference.
A final question on the family: is this family a fictional version of the Panahi family?
I didn’t want to portray a certain type of Iranian family, let alone my own. However, I’m sure that unconsciously I created these characters based on my own experience, and of family relationships as I observed them.

Can you introduce us to the four main actors of the film?
Hassan Majnooni and Pantea Panahiha are two great stage actors whose careers I have followed closely over the years. The collaboration with them was a very happy one. They helped me a lot on set, with many aspects of directing, not only working with actors.
Rayan Sarlak, who was 6 at the time of filming, had starred in a blockbuster TV series that I hadn’t seen. When I started my research, everyone told me to watch it. From our first meeting, I knew he would be the perfect younger brother. He had a very professional attitude on set and a taste for work which I found fascinating, given his age. Even though directing him took a lot of energy, I really enjoyed working with him.

Amin Simiar, the big brother studies drama. I first chose him based on a photo and when I met him I was immediately convinced. The synergy between the four of them worked very well and I took immense pleasure in leading them.

Can you introduce us to your cinematographer, Amin Jafari, and tell us how you worked with him?

I met Amin Jafari on the set of THREE FACES, my father’s film. We quickly became friends and I immediately thought of him for the cinematography on HIT THE ROAD. But he did more than that. He was a true big brother for me, even a therapist who, on set, knew how to calm my nerves, help me find solutions, facilitate my decision-making, discuss framing choices. I am very grateful to him for this generous collaboration.