The cinematic reunion of director P.J. Hogan and his ‘Muriel’s Wedding’ starlet in the (then) making Toni Collette was always going to have a lot to live up to.  The aforementioned Aussie comedy became an instant hit with audiences and has developed such a following in the 18 years since its conception that it was always going to be questioned whether or not the dynamic duo had it in them to make another story and character that would stand as strong next to Muriel’s.  Whilst it’s too early to truly determine the staying power of ‘Mental’, it’s unlikely it will stick to audiences the way Muriel did.  That being said the character of Shaz is unlikely to be forgotten anytime soon. 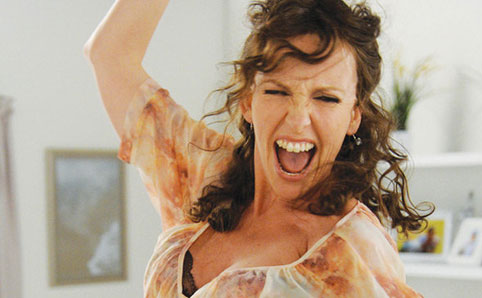 As played by Collette, Shaz is a foul mouthed, straight to the point, non-fearing hitcher who unleashes her mad brilliance on the Moochmoore family when head of the household Barry (Anthony LaPaglia), an adulterous politician and consistently absent father, can’t take the estrogen overload of his clan (no less than 5 daughters to his name) and picks her up off the street and gives her a job as a nanny.  Unassisted by their mother (a heartbreaking turn from a heavier Rebecca Gibney) who has been shipped off to an institution for her unconventional behaviour, the Moochmoore girls are an assorted bag of mixed nuts themselves, believing their the outcasts of the town as they’re so constantly reminded by surrounding neighbours.  Seeing her own broken fracture in the girls helps Shaz identify with them and soon enough she’s building them up for to tackle their own individual demons, and hopefully bring their father round to their side of thinking.

Mental illness is no laughing matter and whilst it’s at the forefront of this film, writer/director Hogan has handled the subject with dignity and respect without the edginess of the comedy suffering in the process.  The film is likely to divide audiences as those wanting another ‘Muriel’s Wedding’ will be greatly disappointed and there are moments throughout the film where it becomes quite a dark outing that the balance is dramatically shifted, and you can’t help but wonder if it’ll ever get back to where it was.  But as uneven as the story may be, the real winners are the collective performances with American star Liev Schreiber (as an amusement park owner complete with a realistic okka Aussie accent) and young unknown Lilly Sullivan (as the eldest Moochmoore daughter) earning particular praise.  Deborah Mailman also throws in a fun turn as an off-the-wall lesbian and, as mentioned before, Gibney is absolutely beautiful in a role that requires her to throw out all vanity and immerse herself in a character that has all but given up.

As with ‘Muriel’s Wedding’ the soundtrack is as crucial to the film’s success as the story is and whereas before we had ABBA, here ‘The Sound of Music’ is adopted as the musical theme bringing about a series of bizarre but joyous numbers.  Those that can handle their comedies with a little more bite than usual, or perhaps that should be fire given the explosive finale (you’ll see what I mean), should be well rewarded with ‘Mental’.  And if not, you can always re-watch ‘Muriel’s Wedding’.