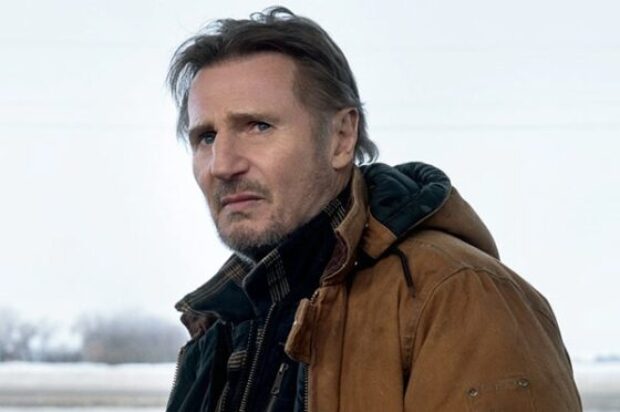 Liam Neeson who has to be all-time favourite action man who sadly announced that the days of making action films may be over as he is getting older and retirement is looking good to him and if he is to sign off he has done so in ‘The Ice Road’.

Filmed in Canada with massive crews in visual effects and stunts, and great cinematography and in the hands of Jonathan Hensleigh, as writer/ director who deserves big applause here to this drama action story where he has great characters in development to the story of a remote diamond mine collapse.

Neeson is Mike McCann, plays older protective brother to Gurty McCann played by Marcus Thomas who has a slow disability in speech but are classed well in rig driving game until his brother Gurty gets them into a drama where they are fired. They then get selected to a rescue mission led by Laurence Fishburne, who plays the head of the rescue mission trip that is to save the lives of trapped miners. In order to get to them, an expert team is selected that brings them to drive across a frozen ocean to deliver life-saving equipment to a team of miners trapped inside a collapsed diamond mine. Alas on the journey is unexpected surprises that does bring the film to great suspense with thrilling visual scenes throughout and a few twists and survival on ice-breaking roads.

Actress Amber Midthunder plays Tantoo a tough cookie and gives a good performance in this very male cast film who is key to help rescue the miners that has her brother traped as well.

I found the film had a great emotional connection to it and did not lose pace and kept the thrills coming. Its appeal should suit a general wide audience and with Nesson in the lead, you cant lose as he has screen power and a great lead role.

Thumbs Up aim to see this in Theatres while you can as it has great cinema scope.