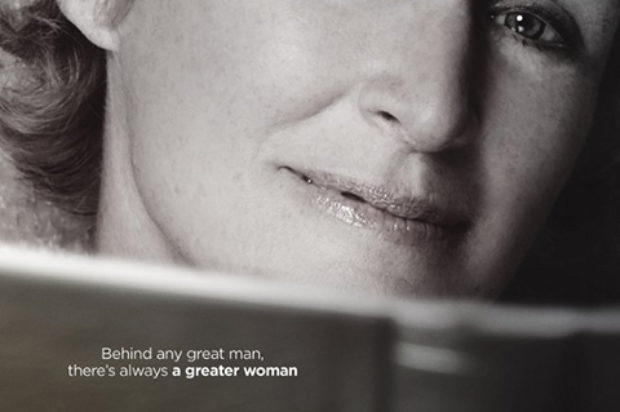 It was 30 years ago that Glenn Close stole the screen as Madame de Merteuil in the deliciously wicked Dangerous Liaisons. Sexual gamesmanship and vengeance were the order of the day and Close, with that glint in her eye and a heaving bosom, played to win. It ended tragically and left us with a haunting shot of her, the mastermind of a deadly game, removing her mask. As Joan Castleman in Bjorn Runge’s new film The Wife, she again dons a mask but this time, such is her technique, we can see that mask and the tension arises from waiting for her to take it off. Runge keeps his focus tight, and even when the narrative lines take us away from her we numbly wish for him to bring her back.

The film itself, set in Stockholm (but mainly shot in Glasgow), is visually beautiful and shot through with autumnal colours but ultimately it’s a nuts and bolts melodrama. It tells the story of Joe Castleman (Jonathan Pryce), a successful author, who is to be awarded the Nobel Prize for Literature. His wife Joan is dutiful. He left his first wife for her, and together they’ve made a dynamic team, a team built on compromises made mostly by her. Nevertheless she’s loved him, given him two children, and stood by his side. But, shortly after their arrival in Stockholm with their bitter son David (Max Irons), a burgeoning writer himself, tensions build and old wounds open. It helps little that Nathaniel Bone (the ageless Christian Slater), a journalist who appears to be clued into the Castlemans’ lives, followed them in the hope that Joe will finally give his blessing to a biography. Runge, in weakly directed sequences, flashes us back to the Castlemans’ humble beginnings in the 1960s where the young Joan (Close’s daughter Annie Starke in a similarly understated performance) met Joe (Harry Lloyd) and became acquainted with the torturous writing process.

“I don’t like to be looked at” Joan says when questioned about the limelight adorning her husband, and she doesn’t. She doesn’t cower as such yet there’s rarely a moment in the film when we can do anything but gaze at her and wonder what’s holding her back. Her reaction to the reception they receive in the snowy city doesn’t sit right. She fusses over Joe, makes sure he remembers his medication, with a sigh accepts his flirtations as a matter of course (she’s been down this road with him before), and eases back even when Joe urges her forward and declares to all and sundry that he wouldn’t be here today without her love and support. This is a film built solely out of Close’s powerful, understated performance. Pryce, Irons, and particularly Slater (he plays an impressive scene with Close where they confer about life over a drink and a cigarette) form a strong foundation but Runge wisely restrains them, and with good reason. It is so rare now to see an actor with pedigree gifted with the role they were born to play. At the height of her powers, Close delivers the performance of her career.