The current version of The Invisible Man is based loosely on the novel by HG Wells is the latest movie to hit the screens by Leigh Whannel who Directed wrote this screenplay. Most famous for the Saw and Insidious movies he brings his mastery of suspense to this project.

With an opening that fills a lot of tension-filled moments as Cecilla is instigating her meticulous plan to escape the clutches of her partner, drugging him to ensure he won’t chase her and shutting down the security cameras apart from the one she uses to watch him sleeping as she changed and prepares for her dash to freedom she is met by her sister just as her partner comes crashing through the car window. The scene is tense and well delivered and Elizabeth Moss owns the role as the harassed partner on a verge of a total breakdown you can sense her total detachment from self and exudes the numbness that comes with depression.

While in hiding she receives news that Adrian is dead and has left her a large income dependant upon a few stipulations. 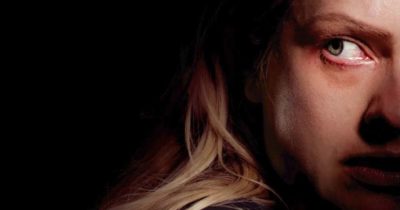 The tension is kept throughout the movie as Cecilia is plunged into despair trying to convince those around her she isn’t crazy and that her supposedly dead partner is hunting her but is invisible.

Whannel does an excellent job, keeping you on the edge of your seat, the pace is intense and yet feels very true to life. The abusive nature of the relationship is outlined and makes the movie feel grounded in truth, as many women are trapped in relationships with a controlling manipulative partner however Adrian takes it to the next level.

The story is not unfamiliar think “Sleeping with the Enemy “and “Enough” but the tension in this outing exceeds the other films and puts in a class of its own. At times I closed my eyes as the tension got too much. A very classy film that relies more on the script and acting with the effects and action used to illustrate the story not compensate for it as in many current films.