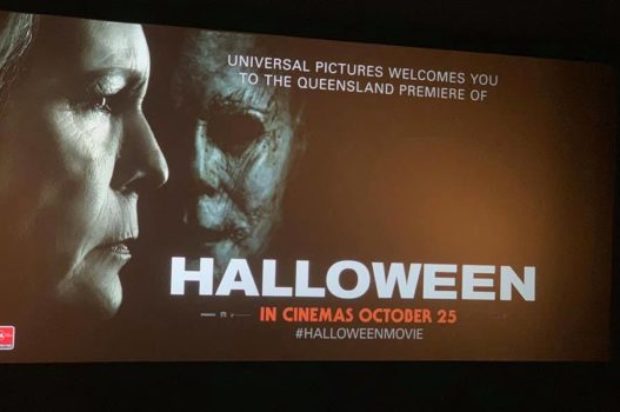 It’s been forty years since Michael Myers was on his last outing as the baby sitter serial killer. For those that haven’t seen the original what this movie presumes is that you understand Myers killed his sister at age six with a knife and in 1978 he escapes custody and returns to reek havoc, after which he is locked up again and forty years later is where this movie begins . Myers is locked up in a mental institution where two bloggers are making an effort to communicate with him before he is moved to a more hostile location.

This is an ode to the original with scenes reminiscent of the slasher film genre of its day. The opening credits and musical score ( by John Carpenter) are very familiar and on that front the movie takes us back . Littered with references to the original movie such as Myers walking into the kitchen using a hammer and then picking up a knife are almost identical so it seems Myers has not forgotten his trade. There is also a scene where Curtis falls out a window which plays homage to the original with a twist.

For an uniniated Halloween watcher I found the violence harsh and aggressive with a cold heartless chill . There is a splattering of gore but ample violence which has been stepped up a notch on this outing. At first the movie felt a bit genre centric but the acting by Curtis and Paton give this movie more depth and class than expected. Halloween fans will not be disappointed and new viewers will appreciate horror without the predictable jumpscares modern horror relies on.