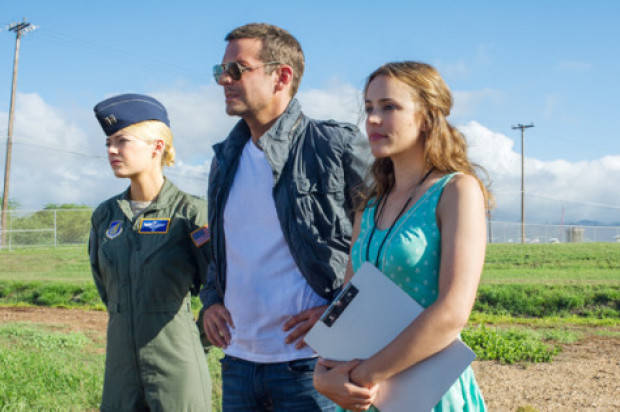 What a complicated, bizarre little feature ‘Aloha’ turned out to be. You would think a project helmed by writer/director Cameron Crowe (‘Jerry Maguire’, ‘Almost Famous’) and featuring the usually reliable likes of Bradley Cooper, Emma Stone, Rachel McAdams and Bill Murray would be enjoyable on the most basic of entertainment levels, but in trying to juggle too many characters and tell a particularly simple story in the most roundabout of ways, Crowe has produced a convoluted, contrived, messy little film that may still have a certain charm to it all but ultimately appears too chaotic for its own good.

A hopeful romantic comedy that’s neither overly romantic nor chiefly funny, ‘Aloha’ centres on Brian Gilcrest (Bradley Cooper), a military contractor hired to overlook a privately funded space launch in Hawaii. Hired to look out for him during his stay is Alison Ng (Emma Stone), an Air Force captain with the sunniest of expositions and a rather annoying penchant for reminding everyone of how native she is given her ¼ Hawaiian ancestry. Though we all are well aware of the direction Brian and Alison’s relationship is heading, Crowe adds fuel to the flame by introducing Brian’s former girlfriend Tracy (Rachel McAdams) to the picture, herself in a relationship tizz of sorts with her husband Woody (John Krasinski), a military man of few words (literally!) who goes on the defensive when Brian is around. Elsewhere, there’s Alec Baldwin’s intense General Dixon, a figure aware of Brian’s military past unafraid to continue disapproving of his current career direction, and Bill Murray as Carson Welch, the billionaire behind the mysterious launch Brian has specifically been called out for. If it all sounds like a great deal to digest, prepare to stretch your appetite to its limit as this story unfolds in a structural pattern that is too awkward to properly detail.

To say ‘Aloha’ is all over the place would be putting it lightly as the story never seems to settle, and the base plot point of the mysterious launch never feels fully established before Crowe deems it necessary to showcase it, complete with a mid-act “twist”. Murray’s eccentric Carson is a fun enough character on paper, but as a realisation he’s less than memorable, and Baldwin’s General feels like he’s only involved to allow the actor to sprout his usual angry shtick that somehow retains an air of charm; apart from Brian and Alison, everyone else feels shortchanged. As for the aforementioned couple-in-waiting, Cooper and Stone play off each other well, and though she is a little too cartoonish and borderline annoying in the opening moments, Stone manages to reel the character in, and somehow as ‘Aloha’ progresses, it gets better. Improving over the course of two hours doesn’t mean the project as a whole is worthwhile though, and those expecting the kind of generic rom-com the trailers would have you believe this is, will be disappointed; sad when you wish a Cameron Crowe film would aim for mediocrity to at least be considered a success.