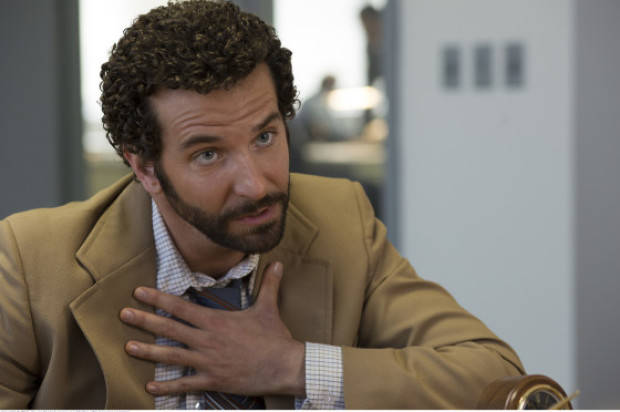 CINEMA RELEASE: AMERICAN HUSTLE
Release date: 12th December 2013
Director: David O. Russell
Cast: Christian Bale, Bradley Cooper, Amy Adams, Jeremy Renner, Jennifer Lawrence
Classification: M (Frequent Coarse Language)
Review by Peter Gray
Despite his unconventional approach to directing, or moreso to communicating with his cast, you have to hand it to David O. Russell for not confining himself to one genre. After the biographical sports drama ‘The Fighter’ and last year’s quirky relationship dramedy ‘Silver Linings Playbook’, a film like ‘American Hustle’ seems oddly in tune as a natural follow-up. As the opening text states that “some of this actually happened” it’s evident that any details originating from facts won’t be getting in the way of telling a good story.
Playing out almost like a caper-comedy fused with a crime epic in the vein of Martin Scorcese, ‘American Hustle’ follows small-time con artist Irving Rosenfield (Christian Bale) as he lives day to day scamming a couple thousand dollars where he can from a series of gullible marks. When Irving and his beautiful accomplice (and lover) Sydney Prosser (Amy Adams) are busted by FBI agent Richie DiMaso (Bradley Cooper), the two are forced into helping bust a crooked politician (Jeremy Renner) whose deeds soon lead them into a sting operation that could potentially bring down both members of the mob and congress. It’s almost textbook Scorcese but thankfully the film never feels like an imitation – even with a wonderfully suitable cameo 2/3rds of the way through the film.
Whilst none of the characters are particularly “good”, Bale’s Irving Rosenfield is indeed the “hero” of the piece with his sleazy conning ways made somewhat redeemable by his love for Sydney, and his adopted son, mothered by a predictably scene-stealing Jennifer Lawrence. Sporting a sizeable gut and an elaborate comb-over, of which its construction process is exquisitely detailed in the first scene, and a wardrobe heavy on velvet suits it’s easy for Irving to be viewed as a clown, but in the hands of Bale it all seems so natural with the actor delivering a truly affecting performance that’s big on heart. On the opposite side of the spectrum is Cooper’s FBI agent whose manic demeanour spirals further and further out of control as the film goes on. Perhaps trying to out-do Bale’s comb-over, Cooper dons a serious perm that on anyone else would seem ridiculous yet somehow here is fitting for the wild narcissism that is his character, and he does appear to be having a grand old time throughout particularly when dealing with his nice-guy superior, played ever so effectively by Louis C.K.. Of all the guys in the film it’s Renner that has the least showy part, and though he’s great as the unsuspecting politician set upon by Cooper and Bale, the material doesn’t allow, nor does it demand, anything outstanding.
As for the women, unsurprisingly both Adams and Lawrence deliver in spades with both actresses excelling in two vastly different roles that only rarely let them overlap, and when the time comes for the two to face-off you won’t be disappointed. As the alluring Sydney Prosser, Adams has never looked better as she adopts a series of cleavage revealing attire and a haughty British accent to assume the identity of European royalty Lady Edith in a bid to lure more potential marks. It’s almost become a staple now for Adams to be recognised each year at Awards ceremonies due to her impressive body of work over the last few years, and this is no exception as she delivers yet another truly fine performance. Chewing the scenery like a seasoned pro, Lawrence is both terrifying and sexy as Bale’s trophy wife whose unpredictable nature serves the film its funniest moments. There doesn’t seem to be any sign of the actress slowing down, and personally I don’t want her to as she once again demonstrates that unique ability to raise an already enjoyable production to a higher level by merely entering the frame.
In addition to a superb cast, O. Russell has constructed a period-perfect soundtrack that helps set the mood of the film with Elton John’s ‘Goodbye Yellow Brick Road’, Donna Summer’s ‘I Feel Love’ and the Paul McCartney James Bond theme ‘Live & Let Die’ amongst the cuts, the latter providing Lawrence’s character with a rather frenzied sing-a-long/dance opportunity that sits as one of the films standout moments. Though it is perhaps a bit too long in length, just under 140 minutes, ‘American Hustle’ is still an absolute blast of a film that should find broad appeal across the board as it has enough ingredients to satisfy the critics and the general public who are looking for a good time out in the theatre.
My rating 4/5 (Crime delivers)