FILM REVIEW AND PREMIERE IN LA OF CHARLIES ANGELS 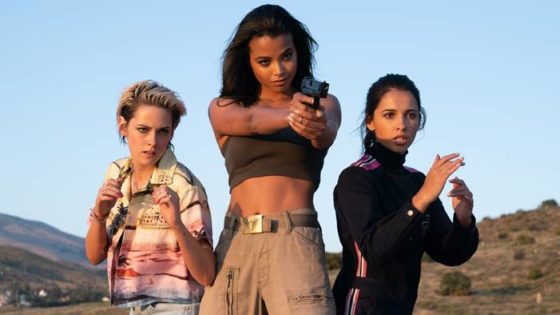 Action; Adventure; Comedy
RELEASE DATE
Only at the Movies! Released as of November 14, 2019

Director Elizabeth Banks takes the helm as the next generation of fearless Charlie’s Angels take flight. In Banks’ bold vision, Kristen Stewart, Naomi Scott, and Ella Balinska are working for the mysterious Charles Townsend, whose security and investigative agency has expanded internationally. With the world’s smartest, bravest, and most highly trained women all over the globe, there are now teams of Angels guided by multiple Bosleys taking on the toughest jobs everywhere. The screenplay is by Elizabeth Banks from a story by Evan Spiliotopoulos and David Auburn. Kristen Stewart, Naomi Scott and Ella Balinska at the World Premiere of Columbia Pictures’ CHARLIE’S ANGELS at the Regency Village Theatre in Westwood.

REVIEW
This Contemporary remake of the Charlies Angels franchise if directly aimed at the current generation of Insta fabulous girls. The pre-movie montage of “girls that can do anything” from a wide range of ethnicities is a positive message and is on point with the current pro-female pro-diversity message. The Movie is a nod to the franchise we grew up with but of course, the Agency has gone Global and expanded since then.

The Angels look amazing, all stunning in their own way Kirsten Stewart with her edgy look, Jane Kano the tall slender supermodel athletic looks and Elena Houglin the more relatable pretty Engineer the Angels are trying to protect.

Commencing with Stewart playing the part of a Blond Bomshell before trying to strangle her date but is only the distraction as the angels burst in to take out the bad guys. The next job is to Protect an engineer with a new power source that has a flaw that can be weaponized to become a very powerful bomb. So the angels get about protecting her and guess what …a car chase ensues !! The engineer starts to screech and shout and I found myself thinking why isn’t she hiding down and scared instead of making all this high pitched screeching. Again this a pretty good reflection of the current generation of females they re loud and unashamed and want to know what’s going on.

Highlights were the amazing costumes and makeup, I found myself making mental notes on the eye-shadow combos and some of the outfits which I loved. Guest appearance by Patrick Steward and Djimon Hounsou lulled me into a false sense of hope that this film was going to develop into something more substantial but it didn’t.

They are some great high impact action scenes and the movie does gain traction along the way, towards the end it becomes an enjoyable ride. With the release in time for the school holidays, this will appeal to the tweens and young adult females with a positive girl-power vibe.