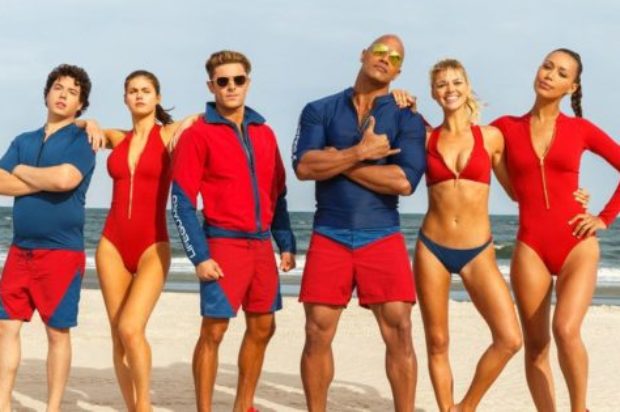 Right from the start we can call out the ‘Baywatch’ television series as really not being that good a show. It had very little to offer beyond slow-motion running shots of ample bosomed lifeguards running up and down the beach, saving a life or two in the process. It allowed the bizarrely appealing David Hasselhoff a second run at network life following his stint on ‘Knight Rider’, as well as introducing the world to the buxom blonde that was Pamela Anderson. The show was inexplicably popular, but popular doesn’t always equal pre-eminence so you had to imagine that a cinematic version was going to deliver more than just generationally-relevant beach-ready bodies in various states of undress running up and down the beach…right?

For the 2017 screen incarnation of ‘Baywatch’, director Seth Gordon (‘Horrible Bosses’) has perhaps done the film a disservice by attempting to develop somewhat of a plot and stifling it in the process by not allowing it to completely embrace its ridiculous origin; the closest the film gets to self-referencing itself is noting Kelly Rohrbach’s C.J. Parker apparent movement in slow-motion. Had this film opted to take the route so gloriously travelled by the far-more successful ’21 Jump Street’ (and its sequel) then we would have something of genuine worth on our hands, but sadly ‘Baywatch’ finds a difficulty in balancing its humour and its action, with the latter genre surprisingly gaining the upper hand when the film opts to pick a side.

As seriously as the action is taken, it can’t be denied that when the film goes for laughs, it hits more than it misses. Sure it’s the usual genitalia gags that prove rarely clever but often hilarious, but they’re performed with such vigour and dedication by the vanity-free cast that you can’t help but enjoy yourself. Speaking of the cast, here is certainly where ‘Baywatch’ is at its strongest, and although Dwayne Johnson and Zac Efron are suitably charismatic in their respective roles as Baywatch’s no-nonsense head lifeguard Mitch Buchannon and the team’s latest recruit Matt Brody, a former Olympic swimmer-turned-poster-boy-for-disgrace, it’s the female cast members that leave a lasting impression – and not just because of their aesthetic appeal; it should be noted that the film doesn’t favour either sex in terms of audience eye candy so there’s just as much bikini body on display as there is shirtless Johnson and oiled-up, 8-packed Efron.

The aforementioned Kelly Rohrbach is an absolute delight as the bubbly blonde C.J. – the character thankfully never being downgraded to the stereotypical ditz personality – as is Ilfenesh Hadera as Mitch’s second-in-command Stephanie Holden, but it’s Alexandra Daddario as another of the crew’s new additions who proves the most effective, overcoming any of the script’s shortcomings with both her wide-eyed innocence and sexual confidence.

Whilst not the consistent comedy the film promised to be, ‘Baywatch’ is still dumb enough fun to not be completely written off. The chemistry between Johnson and Efron keeps things afloat when the surprisingly action-heavy plot attempts to weigh the product down, and it can’t be denied at how deliriously attractive a product it ultimately is (you can’t help but marvel at Efron’s physique), but even when building something so shallow you need to apply a hint of depth, and this take on ‘Baywatch’ sadly doesn’t swim beyond the flags.