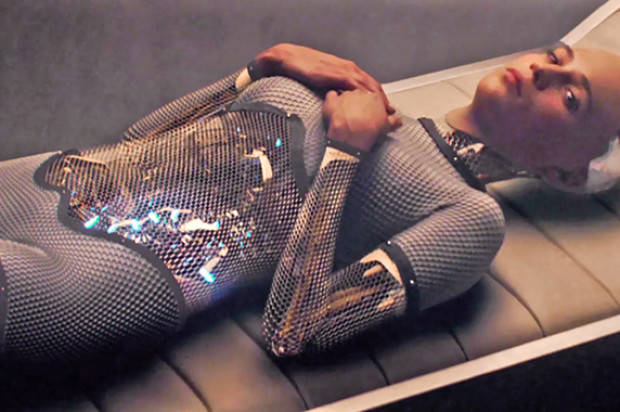 With ’28 Days Later…’ and ‘Dredd’ on his screenwriting resume Alex Garland is no stranger to toying with the science fiction genre, so a feature such as ‘Ex Machina’ feels like perfect fodder for the talented writer to focus his directorial skills on. A compelling and claustrophobic film, Garland has presented us with his dark vision of the (not-so-distant) future, one that sets the viewer on edge with a sense of unease that is hard to shake.

No time is wasted on the film setting up its premise as within moments of ‘Ex Machina’ opening we are whisked away to a sprawling compound where the seemingly awkward Caleb (Domhnall Gleeson), a computer programmer of sorts, is to spend the weekend with his reclusive employer Nathan (Oscar Isaac), a modern day (self-proclaimed) genius who has earned millions off his own Google-like search engine. Though we suspect a specific reasoning as to why Caleb was chosen for this weekend retreat with Nathan, it’s initially played off as random selection for Caleb from the lottery system played within the company, and he has the choice of either hanging out with Nathan for general small-talk and countless shared drinks, or involving himself in a revolutionary project that Nathan assures will be all anyone is talking about in the years to come.

The project is Ava (Alicia Vikander), an artificially intelligent robot who can walk and talk like a human being. With a humanoid-inspired face and sleek chrome body, Ava is a wonder, and Caleb learns that his task for the weekend is to interact with her for Nathan to test how perceptive she has become. Moving at its own relaxed pace, it’s quite a marvel that ‘Ex Machina’ manages to build as much dread and tension as it does with Nathan’s ulterior motives clear, at least to the audience, but to what extent is the bigger mystery. As we watch Caleb and Ava converse, the film becomes less and less predictable as the relationship they share twists ever so subtly over time, and Nathan’s intense interest on Caleb’s test responses instead of Ava’s only adds to the intrigue Garland so cleverly builds.

As concentrated as the film is though, there’s a coldness to it that almost actively wills you to remain distant from all parties involved. Isaac is as excellent as one would expect, but his reclusive-genius-come-caveman mentality starts to grow thin as the film wears on, and as relatable as Gleeson’s Caleb would like to be, the fact that we get to know very little about him before he is thrust into this position makes it harder to connect with him. It could be intentional on Garland’s part though as the way he has staged the film feels quite clinical, and the singular setting of Nathan’s underground bunker only enhances it; the prison-like set is stunning though. As for Vikander, she makes the best of a character that is at once compassionate, carnal, and disquieting.

The ending to ‘Ex Machina’ is perhaps the biggest downfall. Though not exactly a “twist ending”, and I wouldn’t deem it predictable in any way, it feels more drawn out than it should be, and a specific moment that would’ve allowed the film to climax on a chilling, thought-provoking instant is wasted on a few extra seconds of film that seem to pander to an audience who want their stories tied up neatly; the type of audience that ironically this film won’t appeal to. When all is said and done though, ‘Ex Machina’ is a smart slice of science-fiction, and a solid debut for the clearly talented Garland whose aspirations of grand filmmaking are evident here.