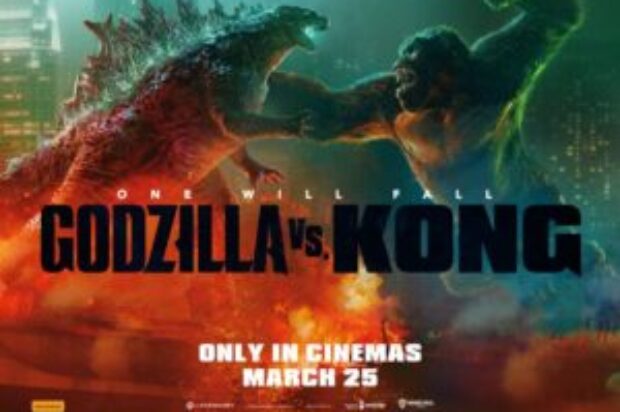 The highly-anticipated film, which was partly shot at Village Roadshow Studios, and on location around the Gold Coast, Brisbane and Ipswich, with production and additional scenes in Hawaii and Hong Kong, will please the fans no doubt as the cinemas open up to the blockbusters to get the full-screen effect of films like this.

The film first lays the foundation with Kong captive in a biosphere with holographic images of sky and birds however Kong has not been fooled he crafts spears from trees to shatter the roof of the biosphere. It is only a matter of time before he escapes and that’s the problem because once he is out Godzilla will come after him. Kong has befriended a deaf girl Jay (Kaylee Hottlewho) who can communicate with Kong. The film sees how their relationship builds as to the bond they have.

Enter now the evil Apex corp who is on the search for the power source that is available in Hollow Earth and have developed a special vehicle that can travel there. Only a Titan can lead them to the power source. Kong is transported by Barge towards the entrance of Hollow Earth but runs into Godzilla Trouble along the way. A huge fight with much destruction follows and Kong is left on the barge to prevent another attack. Kong is flown using a fleet of helicopters to the entrance point.

Once there the Jay convinces Kong to enter the depts of Hollow Earth with the hope of him finding his family. The journey is one rollercoaster, once on the other side, they follow Kong who is on a mission to find and seek. There are some amazing fight scenes in the monster camp.

The plot thickens as to Apex Claims a power source sample and Kong claims his Crown but now Godzilla is once again after Kong and a mighty Clash occurs in the streets of Hong Kong. In conclusion, the ending is one that may have some mixed feelings as it does reflect in a slow and predictable manner as to the characters are scripted. It has widescreen value for all the epic fights and special effects, where fans will get $ value there.