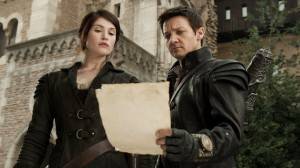 When closely examining the fairytale Hansel & Gretel it isn’t hard to see how a more adult-aimed adaptation could come to fruition.  Recorded in the 1800’s by the Brothers Grimm the story focused on a brother and sister duo who were forced out of their home by their stepmother and left to die in the woods.  Eventually they found their way to a cottage made completely of gingerbread and candy where they were lured by a cannibalistic witch who intended on eating them but they managed to outsmart her and eventually kill her.  Charming stuff right?  Whatever you may or may not remember from the story ultimately doesn’t matter though as writer/director Tommy Wirkola practically re-imagines the entire story having us believe that following their near-death experience with the candy-homed witch our titular siblings found their calling as witch hunters, travelling from town to town ridding them of any witch threats and saving any of their abductees in the process.  With a healthy use of profanity and smatterings of gore this isn’t your average fairytale but for the majority of its running time ‘Hansel & Gretel: Witch Hunters’ is an average movie.

Savvy viewers will be able to pinpoint just where the plot is leading to so don’t expect any major revelations towards its climax, and there’s perhaps a bit too much repetition in the structure of the action sequences – find a witch, chase her down, off her in a gruesome fashion – but credit is served where it is due and Wirkola has thankfully not taken this whole process too seriously and so it’s presented in quite a tongue-in-cheek fashion.  It also helps that leads Jeremy Renner and Gemma Arterton are capable in the action stakes and clearly seem to be having fun.  Renner does his whole dour look thing for the majority of the brisk running time (the film clocks in around 90 minutes) but he does it convincingly that he’s still an enjoyable hero whilst Arterton appears a bit more determined transforming Gretel into a semi-Lara Croft for the medieval times.  As is the case with most of these types of films though it’s the villain that has the most amount of fun and so as head dark witch Muriel, Famke Janssen appears to be having an absolute ball.

Muriel is introduced relatively early in the story and it’s clear she has a connection to Hansel & Gretel’s past, luring them as she and her henchwomen kidnap a select number of children for the ultimate sacrifice which in turn will grant them immortality.  Janssen is rarely seen on screen outside of her ghastly make up and she hams it up with the best of them delivering an over-the-top performance that sits perfectly within the walls of this embellished tale.  Elsewhere there’s Peter Stormare, always a good choice for a slimy scoundrel, offering humorous support as a shady sheriff intent on taking Hansel & Gretel out, and Derek Mears, particularly endearing as one of the more gentlemanly trolls to grace the screen, rounding out what is a surprisingly well-bred cast for what is basically a B-grade horror flick.

Veering further from its source material than recent fairytale-inspired fare like ‘Snow White and the Huntsman’, ‘Hansel & Gretel: Witch Hunters’ has the right ingredients for a fun outcome but it ultimately ends up feeling like a missed opportunity.  Films like this aren’t made to surprise us but this was perhaps a bit too painted by the numbers save for the gore that managed to evoke a few squirms from the audience and make good on the obligatory 3D.  It’s not that this candy coated adventure is bad; it’s just that it’s so lightweight that you’re likely to forget it once it’s over.