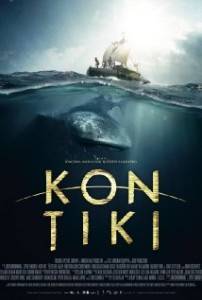 Every thought of building a raft with one small fixed sail and no rudder, taking it down to the sea, jumping on and seeing what fate has in store?

It sounds more than a suicidal nightmare. However, as far-fetched as that scenario appears that’s what one muscle-bound bronzed Norwegian hero did in 1947, with a little help from five of his friends.

The crazy adventurer was ethnologist Thor Heyerdahl (Pal Sverre Hagen) who became a hero to a generation when he successfully negotiated a 6900km nautical journey from Peru to Tahiti.

The idea was to demonstrate to the world that it was possible for the ancient South Americans to have made their way to Polynesia in pre-Columbian times rather than the prevailing wisdom that they had come from Asia.

When Heyerdahl and company crashed into a reef at Raroia and landed safely in the Tuamotu Islands the story made world headlines.

There was a best-selling book, translated into 70 languages, as well as a 1951 Oscar-winning film featuring black and white footage shot from the raft, but it has taken until now to produce a full-length feature film.

Kon-Tiki, which largely focuses on the relationship between the six men on the raft all at sea, is a remarkably suspenseful account of this amazing journey fraught with danger from the deep.

Coming hot-on-the-heels of Life of Pi one could be given for thinking that there’s only room for one small boat story in each generation.

But Kon-Tiki could easily be tagged a psychological thriller as Heyerdahl appears at different times to be delusional, obsessed, intransient, psychotic and finally heroic.

The audience gets a glimpse of Heyerdahl’s personality in its early scenes when, as a boy, he ventures onto frozen ice and after a near-death experience is told, ‘never take a risk like that again’ by his father.

The bulk of the story, however, unfolds on the raft, after the money has been raised for the trip, as tensions between the men grow against the backdrop of this harrowing sea journey.

There’s little female input into the film expect for occasional crosses to the hero’s long suffering wife, whose reaction to the adventure gives the film its final human twist.

The Norwegian film, which has been dubbed into English, was shot in brilliant colour which heightens the over all effect.

Kon-Tiki was won a swag of awards, and was nominated as a best foreign film in the 2013 Oscars.

Those who feel inspired to see the raft can do so at its permanent home in its own Oslo museum.