Film Review of ‘ Alexander and the Terrible, Horrible, No Good, Very Bad Day’

Coarse Language Ed Oxenbould Mild Themes by Caroline Russo | on December 4, 2014 | 0 comments | in Film | Like it 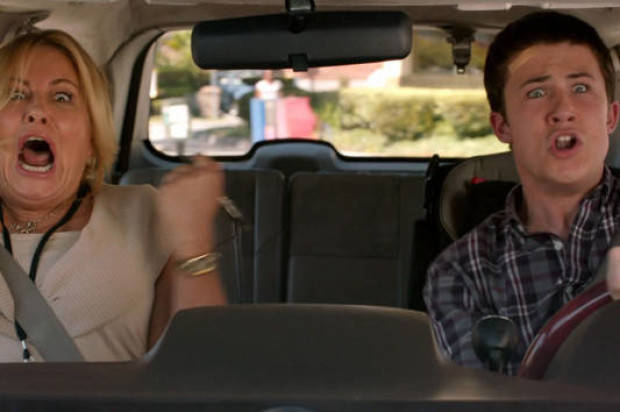 For the titular character in ‘Alexander and the Terrible, Horrible, No Good, Very Bad Day’, life as a 12-year-old just plain sucks! It’s easy to dismiss a pre-teen’s complaints about their existence as a youthful overreaction but for Alexander (Australian actor Ed Oxenbould), life is indeed a bit of a mess. Much like Molly Ringwald’s plight on the eve of her birthday in the classic ‘Sixteen Candles’, and I am by no means comparing these two films on a quality level, Alex is soon to celebrate another year in his life, only it’s everyone else that has something worth celebrating.

As his birthday party approaches and he is faced with the probability of almost no-one attending due to a rival’s strategically thrown bday bash, Alex faces another challenging day which his family seem all too eager to take on. Father Ben (Steve Carell), ever the optimist, is gearing up for a job interview following months of playing stay-at-home dad, mother Kelly (Jennifer Garner) could potentially see her fruitful career in book editing blossom, big sister Emily (Kerris Dorsey), an “actress”, is prepping for the lead role in the school production of ‘Peter Pan’, and brother Anthony (Dylan Minette), the typical good-looking popular sibling, is loving his adolescent years having nabbed the prettiest girl in school and closing in on securing his driver’s license. Life is just so grand, and for poor abandoned Alexander, no-one seems to understand. Luckily, being a Disney movie and all, Alexander wishes that just for one day, everyone could feel what it’s like to experience a terrible, horrible, no good, very bad day – and before you can say “didn’t ‘Liar, Liar’ already kinda do this?” said wish comes true.

Based on the popular children’s book by Judith Viorst, ‘Alexander…’ is a particularly sweet pre-teen tale, and by today’s standards the comedy on offer here is rather tame, but at such a brisk pace (80 minutes) and with an ease in its storytelling, the film is surprisingly funny. Carell and Garner are both pros when it comes to the genre and throughout the film director Miguel Artera (‘The Good Girl, ‘Youth In Revolt’) finds a healthy balance between goofy humour (Dick Van Dyke reading a children’s book which is riddled with misprints is one example of a joke that’s dumb but surprisingly effective) and sentimentality. B y playing it safe and not relying on potty humour, the film manages to produce a few bright spots amongst material that is ultimately aimed at a younger audience. Anthony’s driving test, complete with a cameo from Jennifer Coolidge, hits the right marks, as does the biting dialogue of Megan Mullally as Kelly’s boss. The addition of the Australian male dance revue ‘The Thunder from Down Under’ makes for an odd appearance, but it works within the context of the story, and is one of the handful of laughs aimed specifically at the parents who will no doubt be made to see this film.

As the put-upon Alexander, Oxenbould carries the film amiably, in fact all of the young actors on board deliver to an acceptable standard, and Carell and Garner certainly help the film overall with their charming personas. It’s a predictable film, playing it very safe and by the Disney rules, but for what it is, ‘Alexander…’ is pleasantly not horrible, nor terrible, and you could certainly have a worse day with some of the other offerings currently doing the rounds this cinema season.