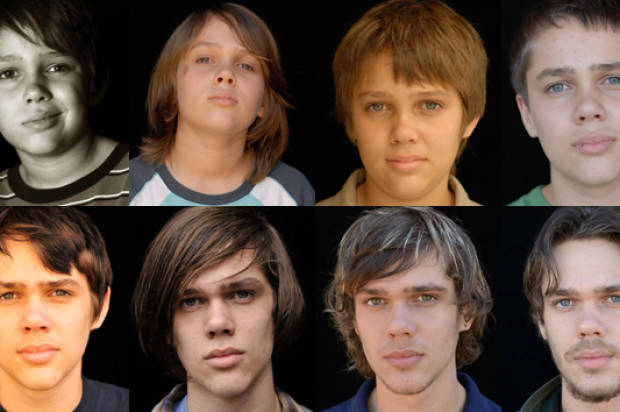 A movie twelve years in the making ‘Boyhood’ is indeed a remarkable achievement from director Richard Linklater who, in between such projects as ‘Bernie’, ‘School of Rock’ and the ‘Before’ movies, was collaborating with Ethan Hawke and Patricia Arquette on this very unique film experience. Whether or not you’re moved by the story he’s created here representing the trials and delights of growing up is up to the individual viewer but there’s no denying that his accomplishment as a filmmaker is worthy of praise.

Filming chronological segments from 2002 to 2013, ‘Boyhood’ condenses 12 years into a 164 minute piece as it follows the more-or-less average adolescence of Mason Jr. (Ellar Coltrane), who we first meet as a wide-eyed 6-year-old living with his protective mother (Arquette) and consistently irritating sister (Linklater’s own daughter Lorelai Linklater). Throughout his life his absent father (Hawke), a somewhat man-child of sorts, pops up to continually play the good cop to his mother’s bad cop, much to her chagrin. Though there’s nothing spectacular about his life, Mason Jr. certainly experiences a gradually complicated existence as his youthful activities of riding bikes, playing video games and quarrels with his sister are outgrown over time, usually deriving from his mother’s ill-fated choices to have a happy family – which begins with her marriage to a college professor whose nice guy persona is quickly doused by his alcoholism and volatile behaviour.

As much as the film belongs to Coltrane, who we literally see grow up in front of our eyes, ‘Boyhood’ is just as much about his parents with Hawke and Arquette showcasing their own growth over its course. Linklater doesn’t bother with titlecards to announce the year; the transitions are simple with Mason Jr. appearing one age before 20 minutes later seeming a little older. And so on. It’s seamless and never once does it feel like a gimmick with the odd pop culture reference – the release of a ‘Harry Potter’ novel, the US Presidential Election, ‘Oops I Did It Again’ from Britney Spears, the discussion of a new ‘Star Wars’ film – being the only real clue as to how far the characters have progressed. Wisely Linklater has opted out of throwing any major melodrama into the proceedings as well, with the simplicity of growing up being enough of a challenge.

The ease to Coltrane’s performance is perhaps one of the film’s strongest assets as he isn’t required to showboat nor is he placed in an over-the-top moment, he’s just a regular young man with an authenticity about him that essentially carries the film. Hawke is just as good in a role that almost feels like an extension of his own persona, maturing from the “fun” dad to a more stable influence in his son’s life. Linklater’s daughter is a treat overall, even if she is a little insufferable in her young age but Arquette is probably the true stand-out, an imperfect character who bares the weight of her own world as well as her kid’s, she never gets to be the fun parent with her bad choices made for all to see. It’s a masterful turn from Arquette and we root for her character just as much, if not moreso, than Mason Jr..

Though I’m full of praise for ‘Boyhood’ in terms of its acting and its structure, when you step back to look at its story, there isn’t really a great deal there. Watching someone grow up is all well and good but is it really leading to anything we care about? It’s an ambitious project without question and Linklater has certainly made a film unlike no other but I’d still warn audiences that the payoff for sitting through this lengthy experiment may not be as satisfactory as you’d like.