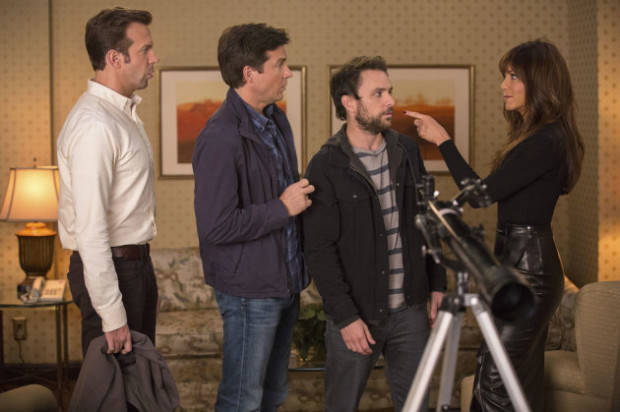 Watching ‘Horrible Bosses 2’ you get the sense that no one involved had any sense of authority, no willingness to rein in any of the talent involved from performing their shtick way beyond the expected boundaries. As the film moves along its 100 minute running time, it’s quite evident at how much fun the likes of Jason Bateman, Jason Sudeikis and Charlie Day are having together, and the likability of said trio is ultimately what helps this unnecessary sequel stay afloat; though the jokes go on longer than they should, they thankfully stall them just enough before they wear out their welcome.

After individually surviving their own horrible boss escapade in the 2011 predecessor, Nick (Bateman), Kurt (Sudeikis) and Dale (Day) have pooled their resources and created “The Shower Buddy”, an all-in-one cleansing shower head apparatus that they hope will propel them into a successful business branch. When Rex Hanson (Chris Pine), an obnoxious trust-fund baby-type businessman, approaches the three with plans of investing in their company, they believe they have sourced their winning ticket, and when Rex’s obscenely wealthy father Burt (Christoph Waltz) places an initial order of 10,000 units, it all seems to be running too smoothly for it not to come crashing to a halt. Enter the Hanson duo reneging on their investment, and stealing the product – now renamed “The Shower Pal” – right from under them. Not willing to take this laying down the group seek “advice” from their extremely untrustworthy frenemy Motherf**ker Jones (Jamie Foxx), and hitch a plan to kidnap Rex and hold him for ransom. Unsurprisingly the plan falls to pieces, but what does come as a surprise is Rex’s willingness to play along with the scheme when he realises his dad just doesn’t care that much about his safety, and so they have to band together in an attempt to regain leverage – if it’s at all possible.

‘Horrible Bosses 2’ isn’t a smart movie in any sense, and it isn’t trying to win a new audience in the process, it’s catering for a specific crowd, and given that its basically playing by the same rules as the original – albeit with a filthier tone – it makes sense that the returning leads play their assigned roles in a similar fashion. Bateman is the “smart” one, always grounding himself in reality and ready to shoot down any moronic idea that is thrown his way; Sudeikis is the crude jerk whose depravity knows no bounds; and Day is the highly-strung wildcard who never thinks his outlandish ideas through to completion. They’re vigorous performers (to say the least) and if you enjoy seeing them riff off one another, chances are you’ll respond to the film accordingly.

Much like the first film though, it’s the supporting, more ‘horrible’ players that prove the most effective with Chris Pine particularly impressing with his comedic timing as the douchebag bait who just wants to be liked once he realises how little he means to daddy dearest. Waltz is seemingly having a little bit of fun too, but it’s rather disappointing at how much of a throw-away role his ultimately ends up being. Kevin Spacey, briefly reprising his role from the first film as Bateman’s (now incarcerated) ex-boss, is clearly relishing his screentime as he berates the lead trio over their poor business skills – which results in a rather spirited speech about them having a severe lack of testicles – and fellow return player Jennifer Aniston gamely lets her hair down with some of the film’s more repulsive material.

With so much talent on board it’s a shame that ‘Horrible Bosses 2’ isn’t as clever or as witty as it could’ve been, instead opting for filthy humour to coax by on which, admittedly, still produces enough giggles to be considered a success. Everyone involved is clearly having a lot of fun, perhaps moreso than what came together on-screen, and in the grand tradition of sequels, this fails to be as enjoyable as the first, but nonetheless it’s a dirty, smutty comedy that doesn’t pretend to be anything else and delivers what its audience expects.