Coarse Language romantic comedy Sexual References by Caroline Russo | on November 6, 2014 | 0 comments | in Film | Like it 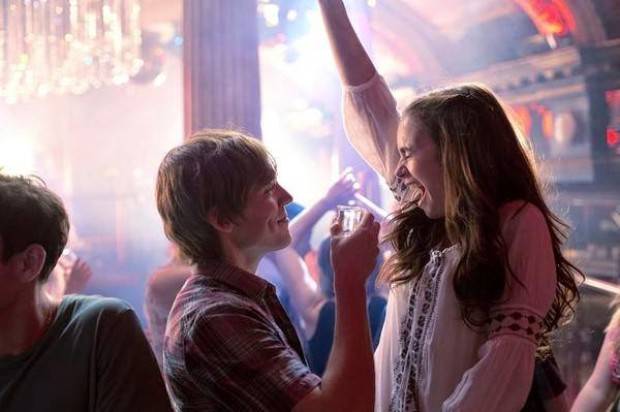 The romantic comedy genre is the epitome of the cliché, and as easy as it is to groan and roll our eyes at every predictable turn, it’s a genre that knows its formula will work on a specific audience, so why fix what isn’t broken right? ‘Love, Rosie’ is indeed playing by the rules of “Romcom 101”, and as much as it wants to be something different and profound in the genre, it can’t transcend its stereotypical ingredients.

One of those bad-timing films where our two lovelorn British protagonists can never quite get it together (at least not in sync) ‘Love, Rosie’ sees our titular female (Lily Collins) umm and err over her future with best friend Alex (Sam Claflin) as they bounce off 12-years of will-they-or-won’t-they? Despite an almost kiss on her 18th birthday, Rosie and Alex claim to be “just friends” and they keep this charade going for the 100 minute runtime as the film carries us over their life (not) together. A spectacularly uneventful night with schoolboy man-candy Greg (Christian Cooke) spells out unplanned motherhood for Rosie, whilst Alex follows his dreams to Boston where he practices to be a doctor.

Unsurprisingly Alex is a success in his fields whilst Rosie goes it alone with her daughter, and though there’s the occasional scene of audible humour (thanks in large part to the sassy Jaime Winstone as Rosie’s particularly lively best friend) ‘Love, Rosie’ is really just going through the motions as it attempts every possible plot contrivance to keep the duo apart; Man-candy dad back in the picture? Check. Leggy, model-esque girlfriends for Alex? Check. Communication errors? Check. We’ve seen it all before, and far better too, which only highlights how average this affair all is. Collins does her best in a role that spans her from 18 years to 30 (highly unconvincing age change to be noted) but you can’t help but think how much more appealing she would be if someone like Rose Byrne was on board, plus as handsome as Claflin is, he never seems like a true romantic comedy lead, instead feeling like the charming jerk the heroine always falls for.

Given how predictable it all is, it’s a miracle that the film works, though it’s mainly a success to those who don’t demand much from their love stories, and there is something about a British romantic comedy that seems to add a sense of charm regardless how good the overall production is. ‘Love, Rosie’ is extremely light (to say the least) though it does have its heart in the right spot which I suspect will be enough for its target audience to lap up the love on offer.