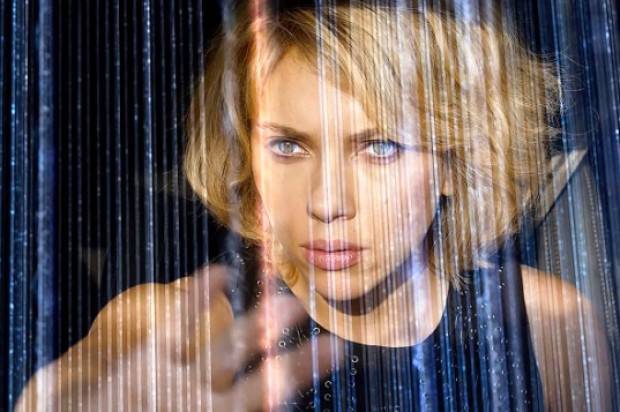 Marketed as an action/thriller of sorts that appears to play out like director Luc Besson’s ‘La Femme Nikita’ entangled with the Bradley Cooper outing ‘Limitless’, ‘Lucy’ is ultimately not at all what audiences will be expecting. If you take Terrence Malick’s mind-mess of a movie ‘Tree of Life’ and re-imagined it as an action film, you have an idea of what Besson was hoping to achieve with ‘Lucy’, a film that easily sets its differing tone from the get-go.

Opening with a shot of the first Neanderthal woman on Earth (co-incidentally dubbed Lucy), the film somehow avoids being a total mess with Besson clearly energised by his unique premise, a welcome change of pace for the director who was practically pedestrian with last year’s mob comedy ‘The Family’. Like its director, ‘Lucy’ is playing by its own rules and your enjoyment will stem from whether or not you go along with the zaniness it presents. The idea that humans only use 10% of their brains, which this film claims, is the prime example of ‘Lucy’ presenting a notion that you either reject or embrace, and though it’s a theory that most people will see as nonsense, you’re better off accepting it as this is still an action movie after all. The titular Lucy (Scarlett Johansson) is a young student living in Taiwan whose new boyfriend involves her in a drug deal, coerced into being a mule by a ruthless gangster (Choi Min-sik). When the contents of the drug package she has had inserted into her abdomen begin to leak into her blood stream, Lucy is able to unlock the dormant parts of her brain, tapping into its full capacity, rendering her virtually superhuman.

As we are reminded of what percentage of her brain she is using with video-game type visuals, Lucy (not-so-gradually) learns of her invulnerability, and though surrounding characters rarely seem overly surprised by her abilities, plot devices that appear silly are somehow grounded by the film’s outlandish logic; an early scene where Lucy forces a doctor to remove the pouch from inside her is a prime example as she executes the patient the doctor was initially working on, knowing that the operation wasn’t going to save them having glanced at the x-rays and concluding their prognosis in a matter of seconds. Similarly, sequences that appear tailor-made for an action set-up are deliberately shunned, clearly working off the rationality of why get into a fist fight when you can control your opponents with your mind? It makes sense, though at the same time a slickly choreographed fight scene wouldn’t have gone astray. But then that would be skewing ‘Lucy’ into the kind of film we were expecting it to be.

With ‘Her’, ‘Captain America: The Winter Soldier’, ‘Chef’ and ‘Under The Skin’ already under her 2014 belt, Johansson is undoubtedly the year’s hardest working, and most consistent, actress and she carries ‘Lucy’ effortlessly, balancing the character’s terror and intensity as “normal” Lucy in the earlier scenes with the more collected, intimidating nature of her “evolved” self. Morgan Freeman does all he needs to do in a typical “Morgan Freeman explains to the audience what’s happening” role, and Cho Min-sik is suitably evil as the Korean gangster intent on taking Lucy out. Additionally the film’s pace is spot-on (it clocks in at 90 minutes) assuring audiences are never bored with psychedelic imagery, a trance-inspired score from Eric Serra, and enough thought provoking themes to have you leaving the theatre contemplating what you just witnessed; pretty impressive for an action film.

It will be interesting to see how audiences react to ‘Lucy’ as it’s one of the strangest films to receive a wide, general release with it having all the right ingredients to be a cult classic in the making. Those expecting a Scarlett Johansson action film will be thrown by Besson’s unsubtle ambitions but regardless of your reaction, there’ll be no denying that you’ll find yourself intrigued by Lucy’s journey.