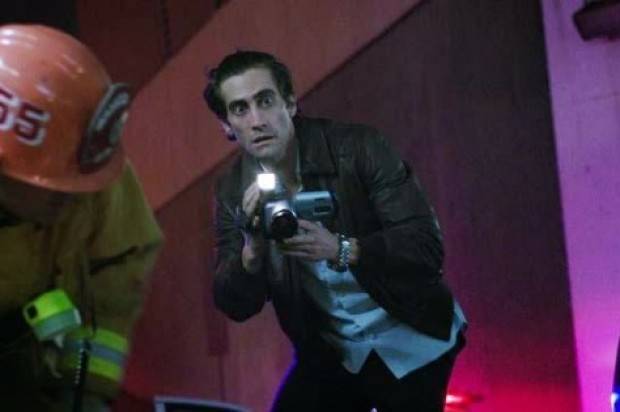 Ever wondered when watching the news who exactly is responsible for filming the aftermaths of accidents and violent crimes? Wonder no more. In Dan Gilroy’s eerie chiller ‘Nightcrawler’ we get up close and personal with one such individual who takes the job terrifyingly serious – Lou Bloom (Jake Gyllenhaal). He’s a vicious breed, highly sociopathic, who when we first meet him is ripping off copper-wiring and manhole covers with the intent of re-selling them to construction companies for pennies. His reaction to being caught in the act signals the violent desperation-come-determination he possesses, and his behaviour only escalates as this darkly humourous thriller spirals ahead.

As Bloom, Gyllenhaal is nothing short of exceptional, with his 10kgs weight loss amplifying the sick dedication this character lends to any of his environments. With his cheekbones appearing more prominent and his eyes feeling like they doubled in size, Gyllenhaal loses himself in this evil, yet fascinating creature that writer/director Gilroy clearly relished creating. As we witness Lou travel further and further down the rabbit hole, he graduates from honing in on police radio, allowing him to be the first on site, to sneaking in or on to a crime scene to film the victims; his interference with investigations to spur further violence solidifying his cutthroat nature.

As nasty as Lou is though, you can’t help but feel that he’s enabled, encouraged even, by the hungry Nina Romina (Rene Russo), a news director at the station Lou starts selling his footage exclusively to. She laps up his brutal clips with glee, informing Lou in the process that he is to think of their program as “a woman running down the street screaming with her throat cut”, and the relationship that develops between the two provides the film some of its juiciest moments as the balance of power held between them shifts ever-so-slightly, culminating in a dinner/date at a Mexican restaurant which showcases Gilroy’s writing and the fearlessness of both Gyllenhaal and Russo, the two of them equally as worthy as one another for acting accolades come award season.

Though hardly a horror film in the traditional sense, ‘Nightcrawler’ is indeed one of the more unnerving cinematic experiences of the year, with Lou Bloom perfecting the archetype of a character designed to inflict an interrupted sleep. Allowing us a glance in to a sordid world that many of us are simply naïve to, ‘Nightcrawler’ is an intoxicating experience that you wish to look away from but can’t help be drawn further into its depth of depravity. Check your morals at the door and enjoy the ride.