PREDESTINATION Strong Sex Scene The Spierig Brothers Violence by Caroline Russo | on August 27, 2014 | 1 comment | in Film | Like it 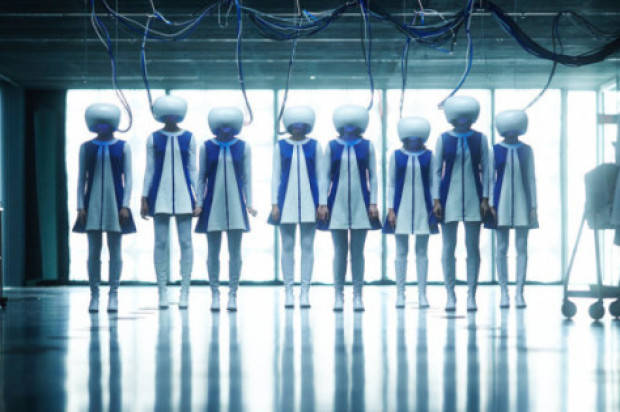 ‘Predestination’ is one of those films that I can’t analyse in great detail as it would be doing audiences a disservice by revealing anything about the goings-on in this intricately woven sci-fi piece. Summarising the plot as a time-travelling agent (Ethan Hawke) seeks a way to prevent a terrorist bombing may seem vague and unhelpful, not to mention there are a handful of films that have dealt with a similar premise, but as familiar an idea it may be, ‘Predestination’ is unlike anything you’ve seen before.

The Spierig Brothers (the filmmaking duo behind the low-rent ‘Undead’ and the more polished zombie actioner ‘Daybreakers’) have certainly made their finest film here, blurring the lines of the science-fiction genre and creating something that’s simultaneously a thriller, an action film and a romance. Though it has evidently been made on a tight budget, ‘Predestination’ never showcases its restraints with its bold mentality thriving due to the more intimate canvas it has been painted on.

I’m sure many a patron will want to pick the film apart when it’s all said and done, and features of this ilk seem to bank on a twist (which you may or may not figure out), but that’s not what ‘Predestination’ is all about; what it ultimately comes down to is performances, and there are a duo of exceptional turns here from Ethan Hawke and Sarah Snook. Hawke seems to of found his niche in the darker side of cinema, having already worked with the directors on ‘Daybreakers’ and since then headlining fellow thrillers ‘Sinister’ and ‘The Purge’, and here is no exception as he handles himself appropriately in both the more action-heavy sequences and the emotionally driven scenes where his quietness excels. However it’s Australian talent Snook that walks away with the film, delivering the kind of performance that careers are built from. Once she’s introduced ‘Predestination’ focuses solely on her and her back-story, the terrorist plot thread is placed on the back burner, and given how detailed and impressive both her arc and performance are, I don’t imagine there’d be any complaints.

I wish I could detail more about ‘Predestination’ but I dare not as my experience with this absolute gem of a film was only heightened by my lack of knowledge as to what I was to see. And even if what unfolds in front of you doesn’t resonate, the turn from Sarah Snook can’t be disallowed as she truly delivers one of the finest, and bravest, performances put to screen this year. A further indication that Australian filmmakers are capable of tackling the international market, ‘Predestination’ is a must-see.