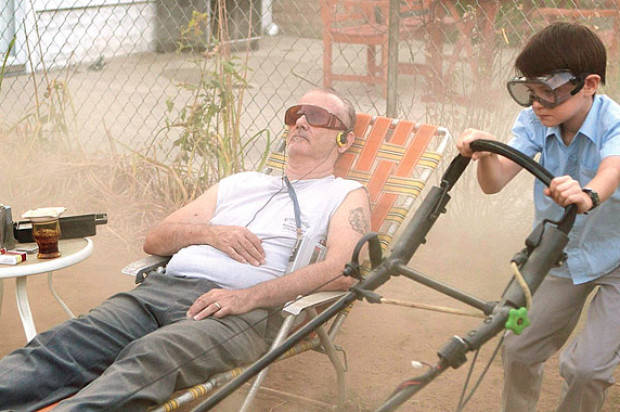 Though the trailers for ‘St. Vincent’ would have you believe it’s some sort of broad comedy about a young boy falling under the wing of a shady “role model”, the reality is that it couldn’t be further removed from those preconceptions as this isn’t exactly what you’d class as a comedy. There are plenty of laughs to be had though, but it’s more a real-world type of comedy that eventually shifts into drama, which lends an emotional weight to the film that many won’t be expecting.

The key to the film’s success though is Bill Murray, portraying the titular Vincent in a manner that only he can pull-off, managing to make such an exasperating character a likable presence. A loudmouth drunk who has no class, charm or morals, Vincent is the kind of ornery neighbour no-one would wish to share a fence with, yet for (recently) single mother Maggie (Melissa McCarthy) it’s her reality. Off on the wrong foot from the get-go, Maggie wishes to make nice with Vincent, and when her precocious 10-year-old son Oliver (Jaeden Lieberher) invites himself into Vincent’s home, an unlikely friendship forms.

There’s always a risk in pairing a seasoned performer with a young up-and-comer, and if the child in question is too sweet, the harder attitude adopted by Murray would’ve been grounds for clashing, which is thankfully avoided due to Lieberher’s naturalistic approach; he’s not goofy or cute, he’s just a normal (if slightly advanced) little boy, and it’s exactly what ‘St. Vincent’ needs. Murray and Lieberher are the two most important ingredients in the film, but they are surrounded by a healthy and capable ensemble who nary step a foot wrong. The two more seasoned comedic performers in the cast, Melissa McCarthy and Chris O’Dowd (playing Oliver’s Catholic-school priest/teacher), are stripped of their usual shtick and, in doing so, deliver wonderful performances; McCarthy is especially good in a straight-forward role, far removed from the likes of ‘Bridesmaids’ or ‘Tammy’, proving how disciplined a performer she can be when given the right material.

The biggest surprise though is Naomi Watts. In a film dominated by actors more heavily associated with humour, Watts delivers the most comedic, clearly enjoying herself as Daka, Vincent’s favourite (thickly accented) Russian prostitute who, despite being heavily pregnant, continues to work as a stripper. If you removed her from the film ‘St. Vincent’ wouldn’t suffer, but she’s a welcome presence as she offsets some of the more serious moments that stop just shy of bogging the film down in emotional manipulation.

Keeping the schmaltz at bay, writer/director Theodore Melfi has created a warm and uplifting tale in ‘St. Vincent’, letting the film ride the wave of letting Murray do what Murray does best, and when he thrives, we’re all rewarded.