Action Violence Jonathan Liebesman NINJA TURTLES by Caroline Russo | on September 17, 2014 | 0 comments | in Film | Like it 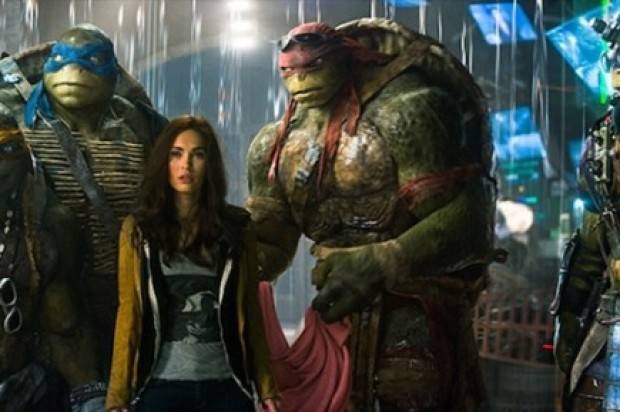 In the late 1980’s/early 1990’s the Ninja Turtles were everywhere with the animated series, extensive toy lines, comic books and, of course, the original film trilogy. For anyone in their 20’s and 30’s, it’s safe to say they grew up with the Turtles in some form, so naturally the idea that a reboot was on hand – with Michael Bay involved no less – wasn’t met with the most positive reception. Would this new take stay faithful to the material and please the fans or would it be catered towards a younger audience who are now only discovering the Turtle quartet?

While Bay has opted out of directing – that honour going to Jonathan Liebesman (‘Battle: Los Angeles’) – his fingerprints are still very much over this as it essentially feels like a ‘Transformers’ movie just with turtles instead of robots; appreciatively though the running time is a more acceptable 2 hours over the last ‘Transformers’ mind-boggling 3 hour length. The move to the 21st century for the Ninja Turtles has also been handled alarmingly respectfully with the dreaded alien rumour thankfully staying a rumour, and their origins resembling that of the TV show albeit with a slight hi-tech spin. The personalities of each Turtle are also finely tuned to the original with Leonardo (voiced by a low-key Johnny Knoxville) being the serious leader, Donatello (Jeremy Howard) the brainy one (complete with hipster glasses), Michelangelo (Noel Fisher) the comic relief, and Raphael (Alan Ritchson) the rebel. Given that Bay has showcased his inability to pull back on “humour” in the ‘Transformers’ films, specifically the second outing, it’s quite refreshing to see each of these characters interact without causing too much annoyance; Michelangelo is perhaps the biggest culprit with a few sexual innuendos related to the character of April O’Neill (Megan Fox), but overall his pop culture references don’t overtly grate.

As for the character of April, she’s perhaps a bit feistier in her 2014 form and though the classic yellow jumpsuit from the cartoon is gone, her yellow jacket is enough of a nod to appease any purists. And what of Fox? Though many had their issues with her casting, it must be said she handles the material in a satisfactory fashion and manages to bring a little bit of life to a character that isn’t given much weight overall with her comedic delivery surprisingly shining through. On the comedy side of things, ‘Teenage Mutant Ninja Turtles’ certainly displays its younger audience mentality with Will Arnett cracking a few jokes as April’s lovelorn cameraman, and Whoopi Goldberg as her no-nonsense boss.

The story itself is particularly basic with the Turtles coming out of hiding to save New York City (again!) from an evil tribe known as The Foot Clan. The first 30-or-so minutes where the Turtles are only alluded to and April’s pursuit of The Foot Clan is the main focus feels much darker and on-par with some sort of terrorism movie as opposed to the family action film it ultimately ends up being, with its M rating easily earned as this alarmingly more violent than one would expect. It’s this odd mash-up of wise-cracking pizza-loving Ninja Turtles fighting off a group of paramilitary types that really hurts the film as it doesn’t quite find a consistency to work within.

Overall though the 2014 edition of ‘Teenage Mutant Ninja Turtles’ is a far better film than I think many were expecting given it’s coming from Michael Bay, and whilst it’s a critic-proof excursion I am happy to admit it’s a trip I thoroughly enjoyed.