Film review of ‘THE EXPENDABLES 3’

Action Violence Coarse Language Sylvester Stallone THE EXPENDABLES 3 by Caroline Russo | on August 19, 2014 | 0 comments | in Film | Like it 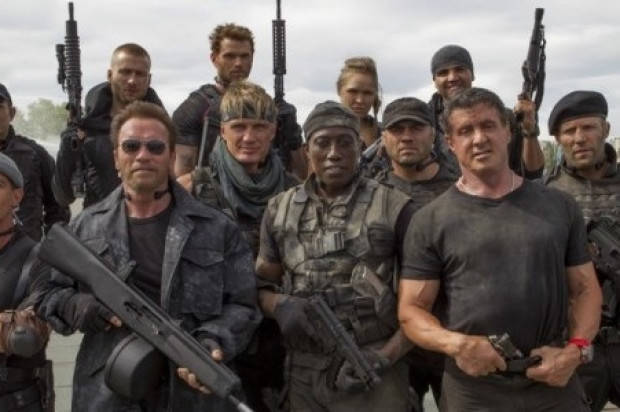 If the original ‘Expendables’ was the most violent, and the sequel was the most foolish then ‘The Expendables 3’ would indeed be the most fun. By claiming so though doesn’t mean this is a good movie by any definition but you have to hand it to Sylvester Stallone (returning as headliner and co-writer) for embracing the cheesy, over-the-top fluff this series has become known for. With this third go-around the titular crew are back in action with a slew of familiar faces returning alongside a bevy of fresh meat that, ironically, don’t hold a candle to their older counterparts – even if said counterparts appear ready to take a nap.

Working with a story that appears only slightly more developed than its predecessors (or it could be basically about the same thing) ‘The Expendables 3’ centres on head mercenary Barney Ross (Stallone) as he seeks out an arms dealer selling deadly weapons to terrorists. The only factor that makes this mission unlike any other he and his comrades have faced is that it involves Conrad Stonebanks (Mel Gibson), a former Expendable who went rogue. After breaking out another former team member (Wesley Snipes) from prison in the opening sequence – his reasoning for being behind bars is oh-so-amusing – and nearly losing another (Terry Crews, who barely registers) Ross decides it’s time to retire his team and recruit some younger players.

Hoping to inject some heart and drama into the film, Ross’ reasoning for retiring the team comes from not wanting to see them die and waste what they have of their life left on dangerous missions that have seen them live out their days to this point without friends or family to come home to (they’re expendable, get it?!?) so it only makes sense to search for younger models with similar fates. This introduces a montage of sorts where Ross is escorted around by the unnecessary addition of Kelsey Grammer to meet his new recruits who arrive in the forms of professional boxer Victor Oritz (as sharpshooter Mars), rising talent Glen Powell (as computer hacker Thorn), ‘Twilight’ man candy Kellan Lutz (as Smilee, a former Navy Seal) and MMA fighter Ronda Rousey (as no-nonsense bouncer Luna). Though I understand the reasoning behind bringing some fresher talent to the table to offset the older names but if Stallone was hoping to attract a younger audience, why he chose a group of relative no-names is beyond me. And after setting up time to introduce these baby warriors, the film sidelines them for a serious chunk of running time (which at over 2 hours is far too long) only to have them end up being saved by the very people they are replacing. I’m sure Stallone was hoping to send out a message that there’s plenty of bark left in the old dogs but ultimately it just ends up being a waste of time on a group of characters we just don’t care about.

The new recruits that truly liven up ‘The Expendables 3’, and make it remotely close to being enjoyable, are Snipes (clearly relishing his return to the screen), Gibson (chewing just enough scenery without choking to be effective as the token villain) and Antonio Banderas; the Spaniard slipping back into the genre with gusto, easily stealing every scene he’s in as a motor-mouth war veteran who just wants to be accepted into the crew. Harrison Ford (replacing Bruce Willis following salary disputes) pops up briefly with his signature scowl, and though he too isn’t entirely useful Arnold Schwarzenegger slips into frame to add to the considerable body count and sprout dialogue that only he can get away with. With too many cooks there were always going to be casualties so original members like Dolph Lundgren, Randy Couture and Jason Statham are downgraded in their screentime, with Crews and Jet Li suffering the most as they amount to no more than extended cameos.

This is Stallone’s show though, and as old and indecipherable as he’s becoming, there’s still something magnetic about him – or perhaps it’s more a curious fascination as to how he’s still able to function. ‘The Expendables 3’ isn’t high art, it’s remarkably low on gore despite a body count in the thousands, and it’s packed heavily with shoddy dialogue and even worse CGI but there’s an enthusiasm scattered amongst the lunacy, plus you can’t help but get a little satisfaction out of seeing John Rambo and Mad Max go head-to-head with each other in the kind of perfectly set-up 1980’s warehouse brawl the film culminates in.