Film Review of ‘THE GIVER’

Jeff Bridges Mature Themes THE GIVER Violence by Caroline Russo | on September 11, 2014 | 0 comments | in Film | Like it 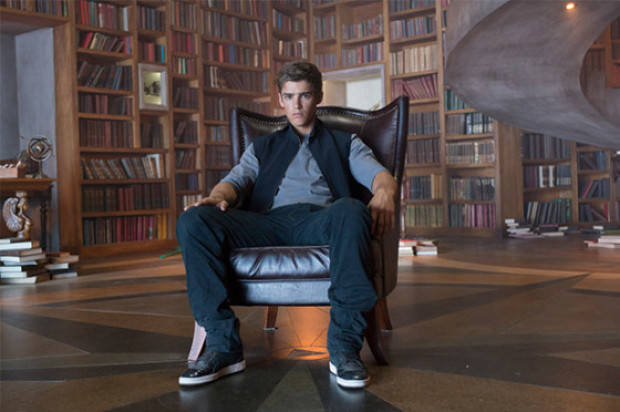 In the wake of the similarly themed ‘Divergent’ and ‘The Hunger Games’, ‘The Giver’ can’t help but feel familiar in its dystopian setting. And though the aforementioned features may be slicker and sexier takes on comparable material, the novel on which this film is based has been around much longer so in actuality they’re derivative of this rather than the other way around.

Altering the 1993 novel to have its lead character Jonas change from 11-years-old to 16, ‘The Giver’ is set in 2048 where, following a war, society has been deprived of any and all colours, therefore eradicating both race and emotion. Jonas (Brenton Thwaites) is chosen by his community to be the “receiver of memory”, a highly coveted position where he is trusted with the knowledge and memories of the world prior to the war. The previous receiver – now technically “the giver” (Jeff Bridges) – introduces Jonas to the past through their secret sessions together, and it’s here where he learns how brainwashed and controlled his community is.

Surprisingly short on any big action set pieces ‘The Giver’ aims to be more than just another young adult adaptation with a sophisticated director at the helm in Phillip Noyce (‘Dead Calm’, ‘Patriot Games’, ‘Salt’) and an impressive line-up of talent with Bridges (also serving as producer), Alexander Skarsgaard, Katie Holmes and Meryl Streep amongst the players, and it’s perhaps that in trying to make this more than just a film for teen audiences, it potentially alienates them as the story is remarkably dialogue heavy and Thwaites’ Jonas has a far more earnest presence to him compared to teen heroine leads like Jennifer Lawrence in ‘The Hunger Games’ films. As well it’s hard to be too horrified at this depiction of the future given the likeness of it all, but the film does score points in its use of colour, or more correctly its lack thereof, with the film commencing in black and white and slowly introducing colour along the way as Jonas is awakened by his meetings with The Giver.

As to be expected it’s the casting that proves the real strength with Bridges bringing a real sense of passion to proceedings, no doubt drawn by his eagerness to bring this particular novel to the screen since buying the rights nearly 20-years ago. Thwaites is a strong young performer and handles the age change from the novel with ease, and he finds able support in love interest Odeya Rush and on-screen parents Skarsgaard and Holmes. On the opposite side of the spectrum, Streep’s presence as the potentially villainous antagonist feels a little like stunt casting overall, and despite prominent billing, pop star Taylor Swift appears in nothing more than a minor cameo as Jonas’ predecessor.

Audiences who grew up reading ‘The Giver’, or are even currently perusing it at school, are likely to appreciate this film more than regular audiences as it will seem too familiar to all the other teen-driven franchises doing the rounds, but if you take the film on its own merits and refuse to compare it, you could potentially find yourself an intriguing sci-fi drama that defies the norms of the genre by aiming for telling a story over the spectacle of action.