Film Review of ‘THE SKELETON TWINS’

Coarse Language Drug Use Mature Themes Sexual References by Caroline Russo | on September 29, 2014 | 0 comments | in Film | Like it 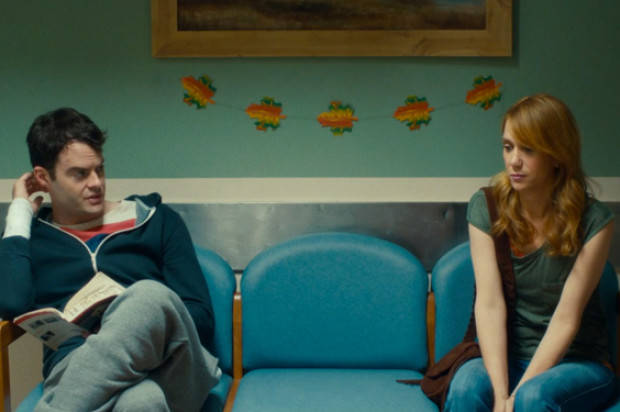 As the titular skeleton twins – so named due to their matching tattoos – Bill Hader and Kristen Wiig showcase their ability in playing it straight following years of off-the-wall comedy sketches in the long-running program ‘Saturday Night Live’, a series both stars garnered prominence. Though not without a significant amount of humour, ‘The Skeleton Twins’ is a dark, at times uncomfortable, dramedy focusing on a dysfunctional pair of siblings who are alternately at each other’s throats or displaying a somewhat loving connection with each other as they find only comfort in each other’s life, even if they feel judged for their failures.

On the day that Maggie (Wiig) intends to take her own life via an overdose, she receives a phone call to inform her that her brother Milo (Hader) is in the hospital following an unsuccessful suicide attempt. Having not spoken to each other in 10 years, this unfortunate event reunites them with Maggie insisting Milo come stay with her, and her adoring husband Lance (Luke Wilson), in their suburban New York home. On the surface Maggie appears to have it together, holding down a job as a dental hygienist, and seemingly happy in her marriage to the overly kind Lance. All is not as it seems though as she suffers in silence over the pressures of Lance wanting to start a family, which in turn drives her into the arms (and bed) of her charming scuba instructor (Boyd Holbrook). With all her flaws it’d be easy to make Maggie an unlikeable character, and thankfully the film never tries to sugar-coat her wrong-doing, but as performed so terrifically by Wiig, Maggie somehow evokes sympathy.

As stellar as Wiig is though, it’s Hader who is the real star, staggeringly good in a role that defies all the stereotypical traits one would expect. A gay actor living in L.A, and freshly single from a break-up, Milo is alarmingly three-dimensional and, despite his prickliness, immensely likeable. An opening line sees Milo refer to himself as “a gay cliché”, but nothing could be further from the truth. And just as Maggie contends with her marriage woes, Milo has his own troubled relationship to tend with, utilising his time in New York to reconnect with an old flame (Ty Burrell), a closeted writer whose past with Milo may be far more complicated than we are to believe.

At a brisk 90-minute runtime, ‘The Skeleton Twins’ manages to run the full gamut of emotions as director/co-writer Craig Johnson juggles both the comedic and dramatic aspects of the script with an assured ease, sending the audience into pits of laughter with such sequences as the twins’ breaking out into a mimed performance of Starship’s 80’s ballad “Nothing’s Gonna Stop Us Now” before breaking our hearts as the two trade insults over the interference in each other’s lives, the script delivering harsh dialogue that unfortunately rings true.

While the film is opening amongst a series of flashier titles, ‘The Skeleton Twins’ deserves a look-in as both Wiig and Hader have never been better in a film that shouldn’t be as heart-warming as it ultimately ends up.